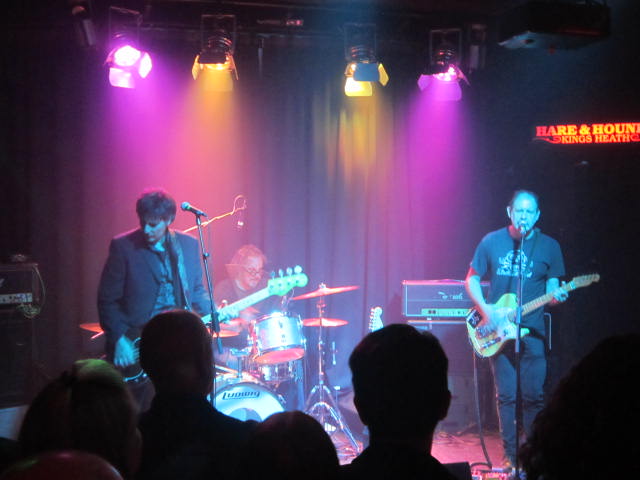 Damian gets his punk on. Did it make his day?

They say never judge a book by its cover and this rings true for the opening band tonight Balsall Heathens. One look and you’d say full on late seventies / early eighties punk. But no, we get a cracking offering of what the band refer to as Gypsy Pirate Punk served up by two great musicians in the form of Sam, who also plays in Contempt and Alcohol Licks on fiddle and Colin “Jock” Blythe from G.B.H. on guitar. The show kicks off with an acoustic number in the shape of “The River” before Sam introduces us to “Whiskey in the Giro” which is a slightly altered Whiskey in the Jar and “The Devil went down to King’s Heath” again an altered version of the classic, The Devil went down to Georgia. Sam did have to check that they were in King’s Heath as this pair must get around the place with their respective bands. The duo are tremendously infectious and we are all, at least toe tapping along as it’s a bit early for all that jumping around stuff. An audience participation ditty called “Life’s too short” follows, where Sam encourages us to shout “Arse” in the chorus. “Moonshine” and “Getting Jiggy with it” close out this short but extremely enjoyable set. This duo would go down a storm at a festival.

Next up are The Dregs. An unashamed four piece, punk quartet, from the Northeast part of Birmingham.We have a slight delay as lead singer Mac is nowhere to be found. He saunters on stage and the band launch into “Spoils of War” from their superb, recently released EP. “One Foot in The Grave”, “Fight it Out” and “Run by Loons” quickly follow with Steve (drums), Potty (guitar) and Lee (bass) bashing out a steady beat to support Mac’s vocals. We get a new song that is so new that it doesn’t have a title yet, but we get some fairly risqué suggestions from a charged audience. The guys have been together, off and on, for over thirty years and dedicate a song called “Inner City Kids” to the Castle Vale estate, from where they grew up. “In Our Hands” and “All I Want” follow before the fellas leave us with “Public Enemy No 1”. I’ve seen these boys before and I must say that they have become a much tighter outfit and tonight we were rewarded with a terrific show.

And so to the headline act Black Bombers. Their self titled debut album is a cracker and I was really looking forward to seeing these guys play live.

The band open with the wonderful “Instro / That Kind” before crashing into “Whiplash” and “Crazy”. The show moves on at a pace with a real intensity. “Breaking Down”, “Police Car” and a song about gold diggers “Early Warning” ends the show abruptly. I wasn’t too sure what was going on as Darren and his bass departed the stage and the other two guys seemed a little perplexed as well. But hey that’s Rock n Roll, The set may or may not have been a little short, but as I’ve not seen this group before, I’ve nothing to judge it against. What I did see was a powerful and passionate performance by a very gifted trio of musicians. Let these boys explode into your life.