There is, it has to be said, a lot to like about Total Chaos before they even sing a note. They were meant to be staying at the house of a friend of mine after the show tonight, but declined saying, they were old school, thanks and they’d do it DIY. That kind of integrity shines through all over the set that Rob Chaos, Shawn Smash, Miguel Conflict, Geordy Justify (I am going to go out on a limb here and say they aren’t their real surnames) play. Chaos, who formed the band 30 years ago (“Black Flag were a major influence” he says, not unreasonably) still seems to live and breathe every word, indeed, he gives every indication that he’d be watching the gig tonight were he not on the stage. The songs crackle with a violent rage too. And a freshness that belies the fact that they are veterans, who haven’t played Brum in a couple of decades. “Police Rat” is dedicated to “people who want to join the police even though the police are the enemy of the people”, there is an as yet unreleased song condemning the politicians who send us to war, and everywhere you look there is some visceral anger being expressed. Moreover, though, there is a love for the music itself. “Street Punx”, “Punx No Die” and more come and go, in a blur, and celebrate the very reason we are here. “Riot City” ends a brilliant set – and if originality was at a premium here, then criticising that would be to rather miss the point. 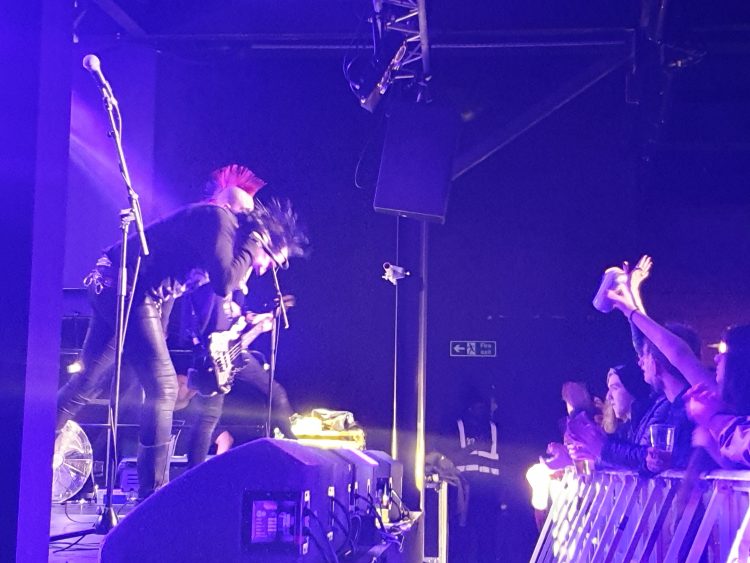 I was sitting behind the barrier tonight, to the left of the stage. I don’t walk very well, that’s the best view I can get here, sitting down. Just before Total Chaos come on, two guys come over, thinking I was security and ask politely if they can come through to go out the back door.

One of them is Greg Ginn. When did he start respecting barriers? Literal or metaphorical.

The Black Flag website states, as matter of factly as you like: “Black Flag is an American band formed in 1976 in Hermosa Beach, CA by guitarist, primary songwriter, and sole continuous member Greg Ginn. Their discography includes seven studio albums and two live albums. The band has released all of their material on Ginn’s independent label, SST Records beginning with 1981’s Damaged.”

The Guardian newspaper, back in 2013 saw it slightly differently: “In the early 1980s, Black Flag were one of the best bands in the world. Black Flag weren’t just a band – they were an art project, a movement, an ethos, a way of being.”

And yet, here we are in a chilly Autumn evening, and I am letting Greg Ginn go to his tour bus.

A couple of hours later, the 2019 incarnation of the band wanders – and there is no better word  for it than that – onto the stage. No fanfare, no intro tape, they are just there.

And so are the classics too. There are 22 songs here, crammed into about 70 minutes of vicious, seminal punk. And if that means there is nothing from their poorly received “new” record from 2013, it does mean there is plenty from the early days.

One of them, “Depression” actually starts things. “Gimmie, Gimmie, Gimmie” too and you can only imagine what it must have been like to see this band in that peak, in the early 80s, when they had nothing to lose.

Mike V, the bands singer since 2014, is in stunning form here. Not demonstrative. In fact he barely says a word between songs, but he has a presence, a sort of authority about him, that carries “White Minority” and “Police Story” along.

About halfway through, almost acting like a pause for breath, new bassist Joseph Noval lays down a mighty groove to herald “Bastard In Love” and some of the songs in the second half are more nuanced. “I Can See You” for example, and “Can’t Decide” is a maelstrom of confusion. However, it ends in absolutely breakneck fashion, “Nervous Breakdown”, “TV Party” and “Rise Above” before – and you hesitate to use the word “jam” in connection to a Black Flag gig, but lets say “Louie, Louie” is an “extended” version, shall we?

After which, they just casually and methodically put their stuff away, while the crowd – and it is hefty tonight – shout for one more song they are not going to get. For 38 years Ginn has been doing things his way, and he’s never changing. By extension, neither are Black Flag. And that uncompromising streak is conversely what makes them so delightful.