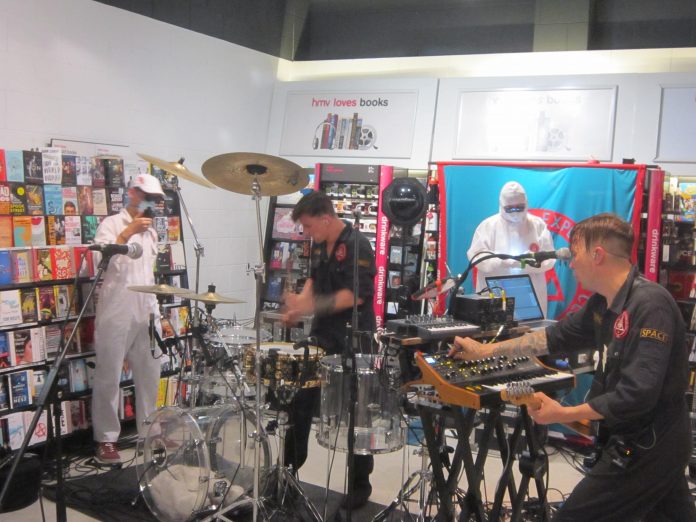 Industrial electro noise punks / future punks Black Futures have just released their debut album “Never Not Nothing” and it`s a cracker. MVM reviewed it and gave it 10/10 and hinted that it could potentially be the album of the year. They head out on the road next month with Black Peaks and prior to those dates, they have decided to warm up with some low key in store appearances around the country. As one of the dates was in Birmingham, it was too good an opportunity to pass up.

A very intense and expectant audience awaits their appearance as a backing track calls out a countdown as the pair SPACE and VIBES take to this makeshift stage and head into a song called `Love` There`s no hanging around before the guys are sharing the wonderfully hypnotic `Karma Ya Dig?` which has elements of early Gary Numan and a wonderful chorus of “I`ll meet you on the other side”  A song that spreads a message of becoming less self-obsessed and selfish and showing some love in your community and your day to day life follows with `Me.TV` and it`s quite bluesy in a live setting with the thumping drums and crashing guitar riffs, My favourite `Body & Soul` follows and although it has hints of the Chemical Brothers and The Prodigy, to me it`s just over three minutes of musical heaven. We get a couple of quitter songs with `Youthman` and `Riches` before the dial is turned back up for the driving `Tunnel Vision` with its thumping drumbeats and crunching guitar riffs. The duo had the audience on their knees literaly a couple of times during the song as VIBES ran up and down the aisles of the store.

The set closes out with the consuming `Gutters` where the pa stacks are climbed, and an audience member is picked to display message boards with the lyrics stencilled on and `Trance` where the guys encourage the faithful to almost participate in playing along with the band. Then it`s over and the duo are hugging as many participants that they can get hold of.

I have to say this was a really interesting and uplifting outing from musicians who can certainly deliver in a live situation. It`s a little unnerving in a nice way as to whether you will be selected to participate but they seem to have a Black Futures Expedition Club and the membership is open if you want to join.