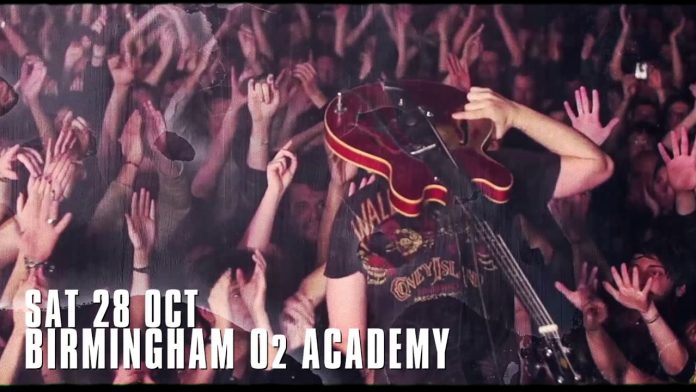 Damian gets on his bike

Hailing from San Francisco, California, the band is named after Marlon Brando`s motorcycle gang in the 1953 film The Wild One. They formed in 1998 and today comprise founding members Peter Hayes vocals / guitar and Robert Levon Been vocals / bass, alongside Leah Shapiro on drums, who joined in 1998 to replace Nick Jago.

The tour goes under the banner of `Wrong Creatures`, which is the title of their new album due out in the new year and a follow up to 2013 `Specter At The Feast`.

The show kicks off with the edgy almost distanced “Little Thing Gone Wild” then an all-out assault with “Bandung Hum” before the wonderful “Beat The Devil`s Tattoo” a song I really love.

The aggressive “Rival” follows with its chorus of `I`m not the righteous, I`m not the innocent` almost spat out, before the troupe ease up with the wonderfully bluesy “Ain`t No Easy Way”.

We get a mix of tracks across BRMC`s career with “King Of Bones”. The dark and broody “Berlin”. “Conscience Killer” with everyone singing along, the pensive “Haunt” and “Question Of Faith.” The crowd really let rip when the hypnotic “Love Burns” is shared before “Stop” a song made for driving to, is aired. We are given a superb tribute to Tom Petty when Robert plays the heart-breaking “It`s Good To Be King” before Peter plays “Devil`s Waitin`”.

There is a more sixties beat feel with “Shuffle Your Feet” before the mesmerising “Rifles” and “666 Conductor” sound out. The indie “Awake” and pulsating “Red Eyes And Tears” get an airing before the set closes out with the blistering “Six Barrel Shotgun”, the enthralling “Spread Your Love” and scorching “Whatever Happened To My Rock`n`Roll (Punk Song)” The band returns with a one song encore with “Ninth Configuration” from the forthcoming release getting a blast before we all head off.

This was an incredibly intense two hour show and I must admit it`s the type of gig that you reflect on, to realise how much you enjoyed it. I think that it was too much to take in as it happened. I first saw the band as part of a ShockWaves NME Indie Rock Tour in 2002 and they were very raw. They have really matured but still retain that edgy intensity and passion.

Black Rebel Motorcycle Club is certainly an association I want to be part of.