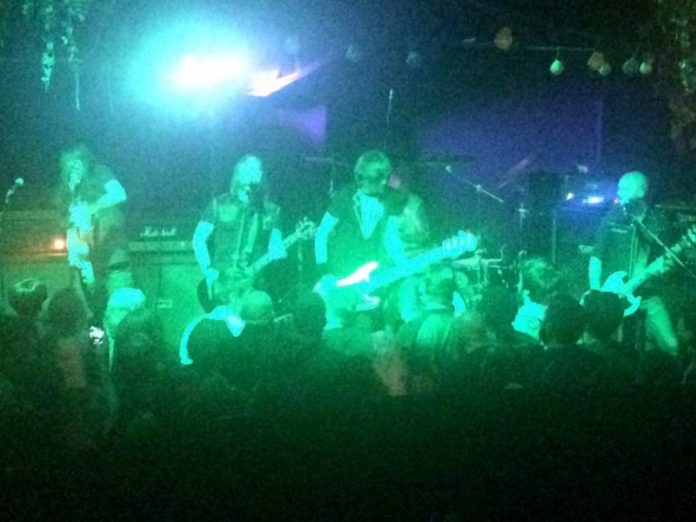 On three, they go. The Black Spiders call it a day

With their hoodies on and bathed in darkness, you could be forgiven for thinking that Servers were some kind of modern screamo thing, or at the very least you’d give them a wide berth if you saw them down a dark alley. Their music, though, tells an altogether different story. Dark hard rock, but undercut with just enough aggression to make you think that avoiding they alley might be a good thing after all. There’s an angular Killing Joke sort of vibe, and singer Lee Storrar possesses a deep Pete Steele lugubriousness. That said these are songs with hooks, melodies and choruses too, and by the time they have ended with what, perhaps, is their best song, the mighty “Universes And Supernovas” there is enough to suggest that this South Yorkshire mob are only just getting started with confounding expectations.

With the politics of the current period being what they are, you do almost have to remind yourself that it’s not the late 1980s at the best of times. One listen to Bigfoot, though and you are instantly transported back to 1988 – and  musically at least, that is just fine. “Run” is a hard rock song and it thinks being a hard rock song is the most fun you can possibly have. Their second song “Come Down My Way” sees effervescent frontman Anthony Ellis don an acoustic guitar for a bit of a power ballad, and you just know it was written so they could pull girls by being sensitive back in the day. Something of a dervish, Ellis is immersed in his work on “Bitch Killer”, which adds a Maiden style twin guitar gallop just for kicks. “Blame It On The Dog” is even more of a giggle than it sounds and “Other Side Of Paradise” is the work of a band that intend to keep this going for as long as they can.

Because, after getting on for a decade it’s all over, and BS have called it a day. It’s impossible not to be nostalgic at times like this. You think back to the first EP which you proclaimed was the future of rock n roll, back to the first time you saw them, in Nottingham, and to the wonderful Saturday night when they supported Airbourne at Wolves Civic Hall and wonder what happened along the way.

That is for after the gig. Because the gig is about “Si, El Diablo”, it’s about “Kiss Tried To Kill Me” which might be the most ludicrous yet brilliant song ever made and it’s about a band that is very evidently enjoying it one last time.

What was always great about Black Spiders is that they never gave two shits about subtlety. That was for other bands, they only wanted to be loud and have great riffs. Christ, hard rock bands don’t have three guitarists. No one told BS.

That’s why “Balls” packs such, well, massive bollocks, and “Trouble” can fight its way out, and that’s why hundreds of people scream “Eat Thunder, Shit Lightning” in “What Good’s A Rock Without A Roll”.

Singer Pete Spiby and guitarist Ozzy Lister bounce off each other and drummer Si Atkinson is one of those sticksmen who thinks Animal from The Muppets was a lot of fuss about nothing, and when they pull it all together perfectly as they do on “Blood Of The Kings” they remain a mighty proposition.

There’s a three-song encore which reminds everyone exactly why they got so excited about the band in the dim and distant. The UK stoner tones of “Meadow”, the greasy Motorhead like riffs of “Just Like A Woman” and the aforementioned “Stay Down” is as riotous as ever.

And that is the final curtain and as the throng files out of the room as Glenn Campbell’s “Rhinestone Cowboy” plays, we can console ourselves with the thought that at least they are going out at the top of their game.

So, yeah, goodbye Black Spiders. And your one-horse town.