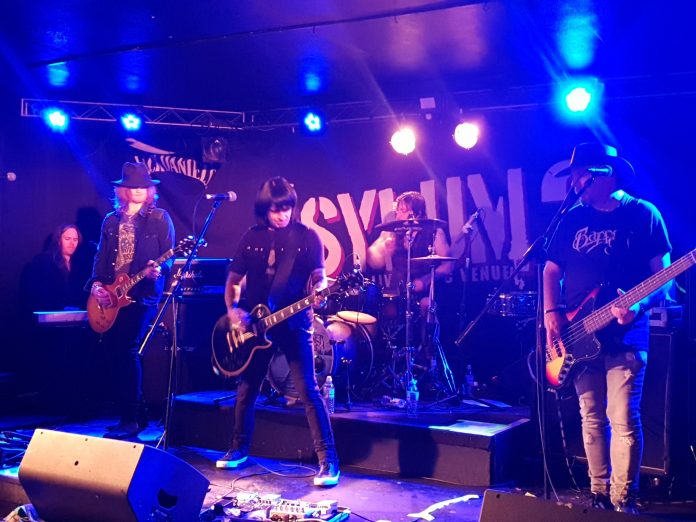 Ok, I have to be honest here. When I saw the venue were tweeting out on Thursday asking for a “classic rock” band to support tonight at short notice, I was dubious as to the quality that would be forthcoming.  Shot Down Zed, though, a young mob from Coventry, were way, way better than you might have expected. And, they aren’t really a “classic” rock band either in truth. The grooves that Lewis Concannon finds are too big, the bass of Nick Harrison just too damn fuzzy to be that. In fact, on my notes while they were playing I only wrote down three band names. Orange Goblin, Corrosion Of Conformity and The Picturebooks, such is the primal nature of this blues.  Singer Steve Birkett Jr is right, when he says: “we’re gonna play some old and some new….but then, they’re all new to you, I suppose”. But of the stuff on their recent “III” EP, “Death Stare Death Rattle” is about as cool as its title, and “Good To Be Bad” is fun. A totally new song “Attack” is aptly named, and with some more shows booked in the next few weeks, it might be that Shot Down Zed are a band you see a lot more of in 2020. 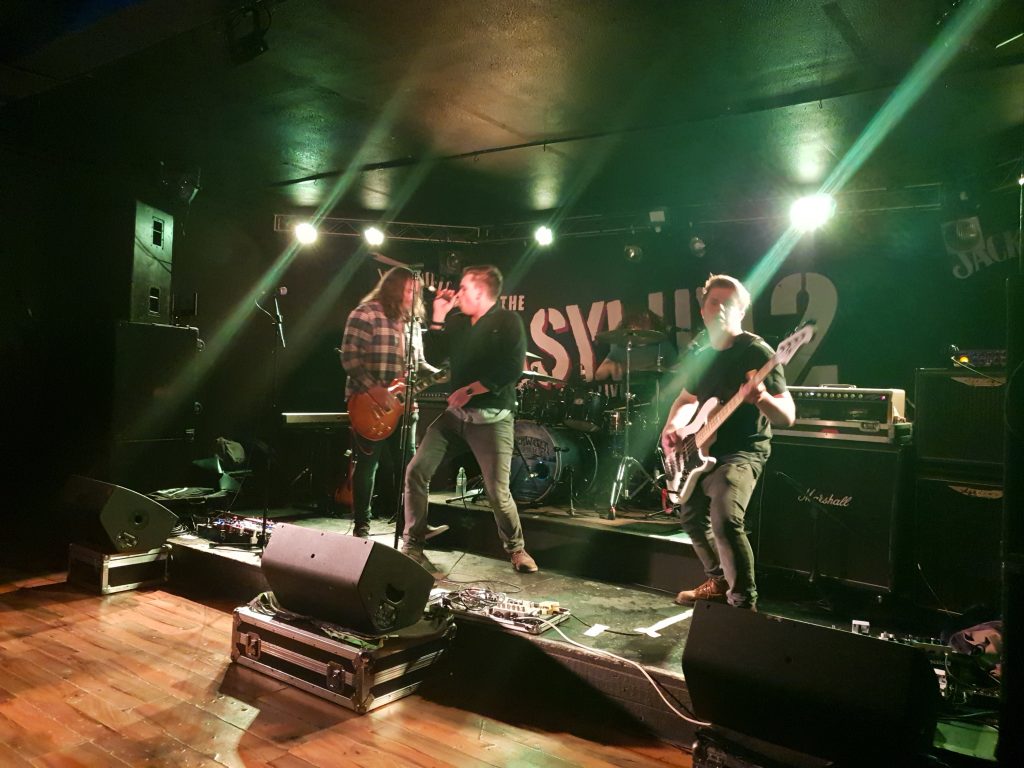 A couple of weeks shy of two years ago, I saw Blackwater Conspiracy open for Tyler Bryant not too far from here. Before I wrote this I went back to see what I’d said about them that night. After suggesting that BC were “quite marvellous”,  I said that it sounded like “The Faces jamming on some Southern Rock” I further pointed out that: “Everything about this…..suggests that Blackwater Conspiracy mean business.”

Everything I said that night could cheerfully apply here too.

A couple of years on from that first viewing, I’ve seen them as support a couple more times. This, though, is the first time I’ve seen them headline.

And what tonight illustrates is that Blackwater Conspiracy are at that tricky period where they have a second record ready. They, ideally would like to play some more of it than they do – there’s a smattering here and what they air underlines how good it looks like being – but they can’t because no one knows it.

But for 90 minutes here, they juggle the whole thing rather well.

“Yesterday”  and “Blackwater Swagger” from their earlier stuff prove the gift that Phil Conalane and Brian Mallon have always had for writing songs and melody, and also the piano of Kev Brennan shows what a miss he’ll be when this last tour is done, but more than anything it all shows a band who are just a little too good to be playing to 50 people or so in a room above a recording studio in a scruffy part of Brum on a freezing late autumn Sunday.

Surely this has to change? Surely when people hear the likes of “She Gets Me High” the first of the new songs, they’ll get it? Conalane’s voice still sounds as good as it ever did, and even a rather odd sound mix in the early songs can’t disguise that.

The set is a mix of new and old with another new one “Take It On The Chin” and the old favourite,  “Penny for Your Dirty Mind” which has a real Quireboys feel here, typical of what they do. The pick of the new stuff, on first listen is “All Wired Wrong”, and this is balanced with the first song they ever wrote for the band, “Shoot The Breeze”.

A cover of “Sweet Emotion” would perhaps, usually herald an encore. Not tonight. “We aren’t doing any of that walking off and on again – boring shite” smiles Conalane. Instead, they just do the two that you always notice when they do them. “Hangin’ Tree” is as glorious as a Black Crowes song, and “85 Rockstar” with its sloganeering “live fast, leave something beautiful” chorus is made for singing at sweaty, booze filled, full gigs.

Let’s not kid ourselves, despite the singer’s best efforts, tonight isn’t one of those. However, Blackwater Conspiracy will get them, if there’s any justice in the rock n roll world. Throughout history there has been some brilliant Irish bands from the North and South. Here’s another. They just need to make the breakthrough.