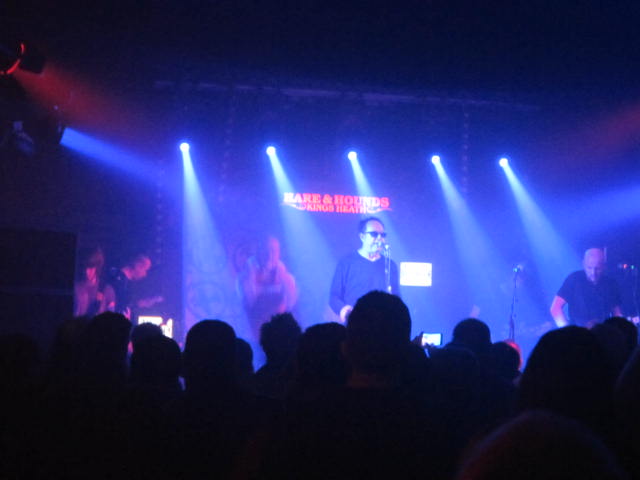 I must admit that I’ve always loved The Blue Aeroplanes, so I was really looking forward to seeing the current line up, especially as they are responsible for the excellent recent release “Welcome, Stranger” The lights dim and we get a recording of an airplane taking off blasting through the pa system as the troupe Gerard Langley, brother John, Bec Jevons, Chris Sharp, Mike Youe, Gerard Starkie and Wojtek Dmochowski take to the stage.

There is no holding back as the band slam straight into “Dead Tree! Dead Tree!” from their latest release. Gerard appears to be holding a clipboard file with what must be the lyrics to the songs, which is no surprise as there have been 48 Blue Aeroplanes over the years so it must be hard enough to remember the band, let alone the words to their substantial back catalogue.

“Beasting”’s wonderful sixties style “Yr Own World” follows before we get three more songs from “Welcome, Stranger” in the form of “Retro Moon”, the stop start, fast slow “Looking for X`s on a Map” and a cover version of Shanks and Bigfoot’s 1999 no 1 hit “Sweet Like Chocolate”.

A song from what is probably my favourite Aeroplanes album “Swagger”, is next with “What it Is” before Gerard steps aside and I think its guitarist Gerard Starkie who steps forward to sing “Missy Lane”.

What I would describe as the bands country and western song is aired in the guise of “Oak Apple Day” before four songs from “Welcome, Stranger” are shared. “Walking Under Ladders For A Living” introduced as a superstition dating back to medieval times, the superb “Elvis Festival”, check out the video on the net, the psychological “Nothing Will Ever Happen In The Future” and “Skin” sung by guitarist Bec Jevons.

The classics “Jacket Hangs” and “And Stones” from “Swagger” are gifted to us before the set closes with “Here Is The Heart Of All Wild Things” ending in a cacophony of noise as the band exit the stage.

We get two encores which include the cracking “Fun” which I think Mike Youe sings, an up-tempo version of Bob Dylan’s “I Wanna Be Your Lover”, new song “Poetland” and finally a cover of Tom Verlaine’s “Breakin In My Heart”

Well what can I say, it sounds crazy but I think I may have seen my gig of the year and it`s only January!!! If not, this will be the one to judge all others against. As far as I’m concerned the best thing to come out of Bristol, apart from Patrick Duff are these guys and It was wonderful to not only see them again but to witness Wojtek`s non stop hypnotic dancing.