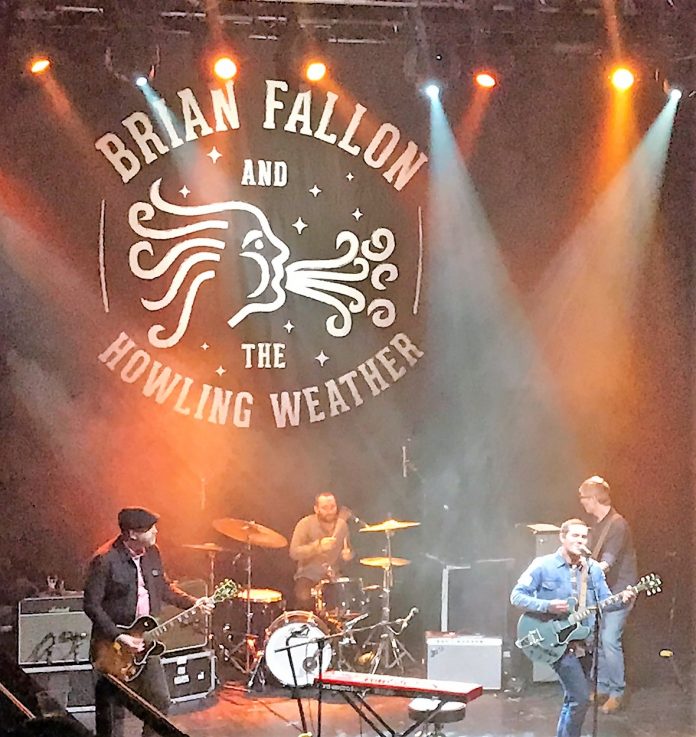 The tour proper kicks off. IT Crowd impressions are an unexpected bonus 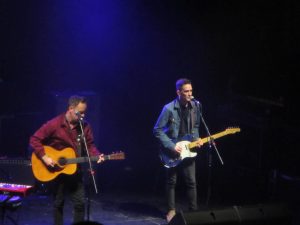 Dave Hause, has in various guises opened for Brian Fallon at times over the last few years. The pair are friends, but there is a musical similarity too. Hause, appearing with his multi-instrumentalist brother Tim (“within a year he became the best guitarist I know”, says Dave here, “so I asked him to learn the Mandolin in a week before this tour….”) might have something a little more raw, perhaps, about his stoically passionate delivery, but he very much belongs in the same company as tonight’s headline act. “Shaky Jesus” is an impressive opener, but “C’mon Kid” which sees Tim play the piano is even better, while “Mermaid” sees the singer switch to his electric guitar, before taking to the keys himself for “We Could Be Kings.” Although it doesn’t finish the set, the reverential way they play “Won’t Back Down” shows a love for Tom Petty that is heartfelt, and the one that does end things “With You” wraps up an entertaining and compelling set  – one which will give Hause plenty to build on in the future.

There is a moment in the second song of Brian Fallon And The Howling Weather’s set where it all makes sense. Unprompted, the huge crowd – packed to the rafters is a literal statement tonight – does the chorus. Equally there is a moment in “Forget Me Not” a little later in the evening, that sums Fallon up perfectly. A blend of the classic New Jersey sound, a dash of punk and a little soul, and a hook line that talks about “melancholy songs that somehow make us feel a whole lot better.” Talk about nail on head.

A lot of the set – quite rightly – is made up of brand new songs from the wonderful “Sleepwalkers” album. Out for less than a month, many of its cuts are already becoming favourites, not least the aforementioned “….Not”,  but also the timeless brilliance of “If Your Prayers Don’t Get To Heaven”, the darker “Come Wander With Me” and the standout “My Name Is The Night (Colour Me Black)” but it also goes off on tangents too.

Some of these are fun, with frequent smatterings of The Horrible Crowes material – “Ladykiller” early and the brooding bleakness of “Sugar” later, but some not so. Fallon is an engaging, funny warm and humble individual, one who acknowledges his debt to the audience frequently, but a few too many times here he disappears on lengthy rambles. Some work, his impression of the IT Crowd’s goth character is superb, but some don’t. A little too long is spent on less than memorable improv and some momentum is lost in places. 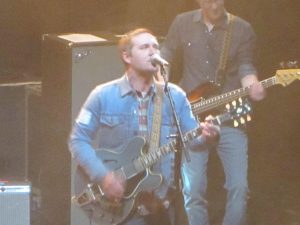 Mostly, though, this is a fine set from a special artist. One who can write songs as good as “Etta James” which he delivers as if lives depend on it. Ending the set with “Behold The Hurricane” – another Horrible Crowes song, he returns within seconds for an encore.

Last time he was here in this room, he wouldn’t play one, tonight he uses it as an opportunity to give the “59 Sound” a fragile, emotional makeover and “See You On The Other Side” an acoustic airing, before the band return and Fallon proves he’s the heir to John Fogarty’s throne with a mighty “Travellin’ Band.”

Tonight reinforced three things. First, Creedence Clearwater Revival rule all. Second, rock n roll is better when it’s sung and not talked about but third – and here is the most important of all – Brian Fallon is a fantastic performer.