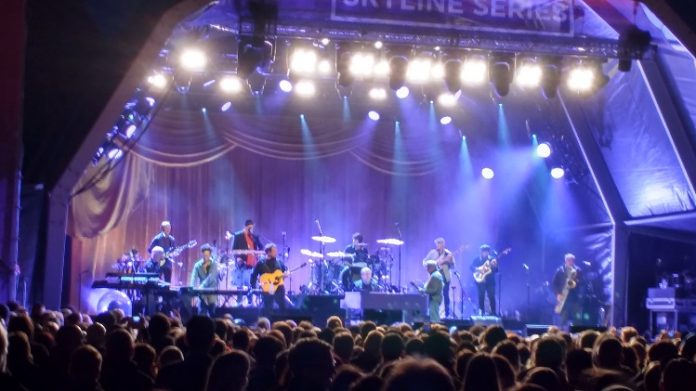 The Skyline Series is a new run of concerts across Bristol and Birmingham, over several weekends this summer. The Inaugural show in Birmingham tonight was the legendary co-founder of The Beach Boys playing the whole of the iconic Pet Sounds album and greatest hits live. This evening`s show was an open-air event, at the Digbeth Arena area in the centre of Birmingham, I was quite looking forward to attending this event as not only was a new venue for me, but I adore Mr Wilson`s Pet Sounds album. I had a few misgivings also as it had rained most of the day. I have to say that on arriving at the Digbeth arena, this 12,000 square foot former scaffold yard was pretty much set up for a seasoned gig goer. The views of the stage seemed accessible from all around.

The appetiser for tonight was London quartet, Turin Brakes, a band I really like and hadn`t seen live since a festival slot at V2001 despite numerous near misses over the years. The boys hit the stage and blast straight into the wonderfully infectious “Wait” from their eighth studio album `Invisible Storm` released earlier this year. A three-minute slice of heaven. The more introspective `State Of Things` follows before we get another cut from the recent release with the catchy “Lost In The Woods” The band comprising original duo Olly Knights and Gale Paridjanian, and long-term collaborators Rob Allum and Eddie Myer seem genuinely delighted to be here, thanking us all and commenting on the terrific sunset they are witnessing from their vantage point on stage. They fly through a sample from a selection of their albums with the stunning “Last Chance”, “Don`t Know Much”, “Keep Me Around” superb “Painkiller (Summer Rain)” and “Fishing For A Dream” The set concludes with the intensely emotional “Black Rabbit” and “Underdog (Save Me)” The guys leave the stage after receiving an enthusiastic reception.

A little before nine, the band come on stage and Brian is helped to his piano to rapturous applause from the audience. It is no secret that the artist has suffered from depression, drug abuse, mental health issues and manipulation almost bordering on abuse during his lifetime, but he’s survived and the love this audience shows him is almost tangible. The hits come from the very start with the cracking “California Girls” opening the proceedings. “Dance Dance Dance” and “I Get Around” quickly follow before Wilson shares that the next song was the very first he wrote and plays “Surfer Girl”

Al Jardine`s son Matt Jardine supplies his wonderful vocals on the classic “Don’t Worry Baby” and it’s as close as you could get to the original Beach Boys being transported on stage. Blondie Chaplin, guitarist and singer with the Beach Boys from the seventies and cohort of The Rolling Stones rounds off the first section by taking the lead on “Darlin`”, “Wild Honey” and “Sail on, Sailor”

Pet Sounds is The Beach Boys 11th studio album, released in 1966 but more often known as a Brian Wilson solo concept album. The band weren’t overly enamoured with what was offered by Wilson at the time but as history teaches us, it is one of Rock’s greatest offerings We get to enjoy the album in its entirety with classics such as “Wouldn’t It Be Nice” and “God Only Knows” It’s difficult to believe that this album was composed by a twenty two year old, fifty years ago, I can only imagine what we would have been presented with if the technology we have today, had have been around then.

The final section is where the band has some fun and the audience really let themselves go and dance. Who cannot be moved by “Good Vibrations”, “Help Me, Rhonda”, “Barbara Ann”, “Surfin’ U.S.A”, “Fun, Fun, Fun” and finally “Love and Mercy” Classics

Tonight, was an event, that at times was painful to watch the decline of Brian Wilson both physically and vocally, but he is a survivor and there was so much love and support for him from this crowd that it was almost palpable. A mention must be made to the wonderful band members including, co-founding Beach Boy Al Jardine, that kept this show so tight and ticking over. An emotional and rewarding evening.