One thing I have learned over the years is I always like two piece bands. No Fit State from Leeds are exactly the sort of thing I am here for too. Raw – because two piece bands always are – yet classic hard rock, NFS are a welcome addition to the UK scene. New single “Enemies” (which apparently was due to be played on Johnny Walker’s rock show on Radio 2 at the time they were on stage here) has been out a mere matter of weeks, but it is rip-roaring stuff. A bit of a Vriginmarys thing going on, it is superb – but is far from the only thing Danny Yates and Mike Nelson have to offer. Their half hour is littered with stuff that has you reaching for the obvious Black Keys and Royal Blood comparisons, except that is mere laziness, because what No Fit State is original, fresh and with a touch of Northern grit, as “Need Your Love” proves. Indeed, the only thought having seen them for the first time here, is that you are all going to see a lot more of them in 2020, because No Fit State are fit and ready to grasp 2020 by the neck. 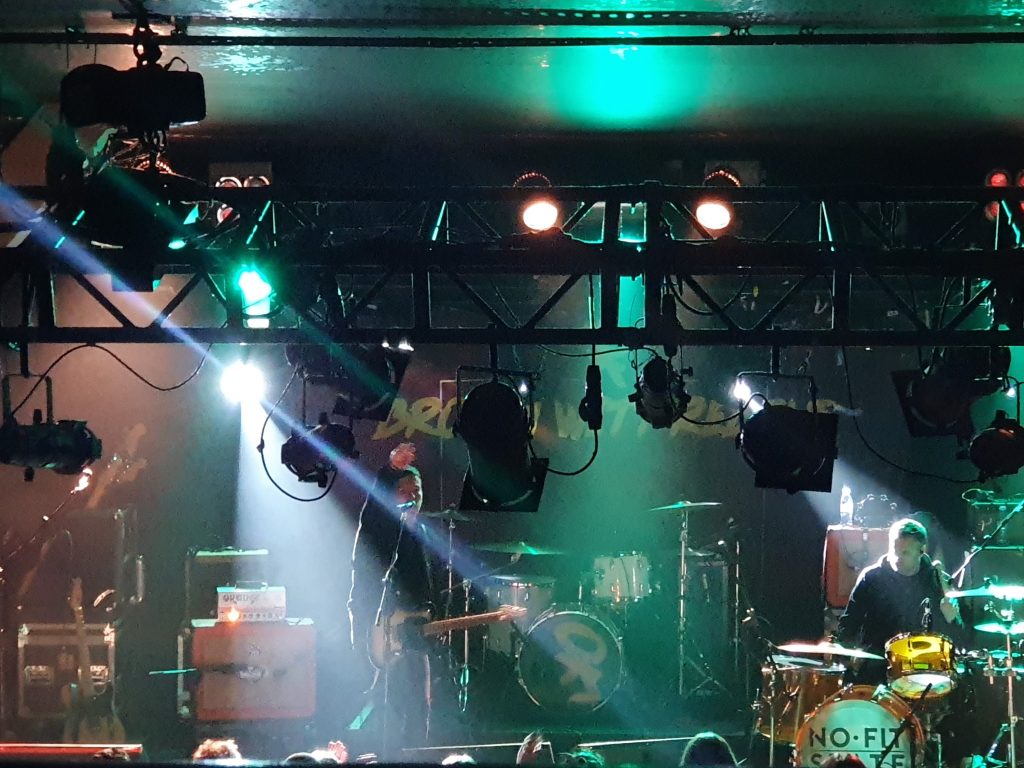 There’s a moment, when they are doing “Low” about halfway into this set, you look at Danny Core, the singer in Broken Witt Rebels, and you almost can’t help thinking: “go on, mate…..”

I am staggered in truth, given how hard BWR work, that assuming I haven’t lost a review somewhere, that it was the Spring of 2017 when last I saw them. Opening for King King. That night, I wrote this: “As “Shake Me Down” ends another half an hour that has won over another crowd in another town, the thought crosses minds that it will not be the last and Broken Witt Rebels are only getting started.”

That’s true. And they still are. But tonight, you look at a young band, one who has done everything the old school way. A couple of EP’s an album, touring, being so good they can’t ignore you, and you see a band that is now genuine headliners. An hour and 25 minutes of a set, to a packed venue.

A set that is roughly half and half old and new (and by “new” I mean from a record that isn’t out yet) is one of those that you’d call a victory lap, except that here, it feels they are only just getting started. Whatever, “Loose Change” kicks things off, “Snake Eyes” too, and both are greeted like old friends.

Playing all the new ones is interesting, because there’s only been a couple revealed so far, but I guess the four piece are desperate to showcase the material, given that they have had some of the older ones in the set for years and it is – on first listen – proof that the album they are going to release in February could be incredible.

New track “Running With The Wolves” played this week at the Wolves Europa League game, is a prime example of this, but it is “Broken Pieces” that really hits home. Core speaks emotionally about the death of his father as he wears something of his dad’s before it plays, and if there’s always a feel that their song are full of emotion, then this one takes it a new level.

The mix of new and old works so well, but particularly with “Georgia Pine” and “Money” which really shows their brilliance – and that isn’t too strong a word, either. And what of “Shake Me Down”? The longtime set closer, has not, as far as I remember anyway, had the accompaniment of Core’s brother waving his shirt above his head on stage. It does here. It’s their party. He’s allowed.

The encore ends with “Guns” – the single, the catchy one, if you like, the singalong that will always sound ace in a field at a festival, but it’s the one before that sends you into a reverie.

James Tranter, the bands guitarist, is in great form throughout tonight, but there’s something about the acoustic fragility of “Birmingham” that makes this special, and the lyrics:

Like Spurs fans sing about Harry Kane: he’s one of our own.

I live about ten miles from where most of BWR grew up in Castle Vale in the north of the city. And we know a bit about making great music around here. We invented heavy metal (sorry world, but we did), we perfected glam rock (Slade, no debates) and many, many more. The point I am making is the West Midlands has a rich musical history. It’s future, unless I am very, very wrong, is right here.