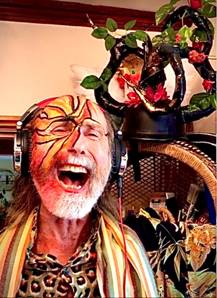 Following the government’s announcement of a £1.57 billion package for the arts, culture and heritage industries, ‘60s rock icon Arthur Brown is seeking assurance from the government that the money will be used to support those in the sector who remain unable to work due to the Covid-19 crisis.

When the government forced venues to close on 23rd March many of the UK’s 210,000 people whose livelihoods depend on the music industry saw their incomes disappear overnight. With no clear date in sight for venues open, Brown is concerned that the government have yet to clarify whether or not the emergency funding package for the arts will be made available to support the people who work in the creative industries, instead of just venues and institutions.

Brown said, “I challenge Culture Secretary Oliver Dowden to a debate to establish, unequivocally, what the government are going to do to protect the livelihoods of the people who make an industry worth £5 billion a year to the UK economy actually happen. As things stand, we simply don’t know how the government’s £1.57 billion support package for the arts is going to be distributed. Will it provide financial support for musicians and the industry’s vital eco-system of many thousands of freelancers, many of whom have fallen through the cracks of the existing support schemes during the pandemic? If not, why not?”

“Music can be a voice of the downtrodden, a voice of angels, a voice of anger, a voice of mercy, love and hope. It can help breakdown prejudice. It can also be the background to all our daily activities. It can raise our mundane working life into a harmonious worldwide ritual. It is a language that can unite the whole of humanity, so I am urging the government to confirm meaningful financial support for all of those affected in our industry until such time as they can earn a living again. You can’t seriously force and industry to close and then withdraw the financial support before said industry is allowed to fully reopen. It wouldn’t make any sense.”

The self-proclaimed “God of Hellfire”, best known for his Crazy World of Arthur Brown hit ‘Fire’, which reached number 1 in the UK singles chart and number 2 on the US Billboard Hot 100 in 1968, announced last week that he is releasing a cover on The Animals’ 1964 hit ‘House of The Rising Sun’ under the moniker ‘Arthur Brown’s Crazy World of Lockdown’ to help raise funds and awareness for Help Musicians.

With no paid live work possible, Brown, 78, has himself turned to Help Musicians for assistance. He said, “As I said last week, I truly understand this situation because I am directly affected by it. I’m not allowed to return to work, so I can’t earn a living. It’s that simple. Almost everyone I work with is in the same situation.”

When the government suddenly announced its rescues package for the arts on 5th July Brown initially thought his objectives had been achieved. However, having studied the announcement, there was no mention of support for the industry’s performers and freelance workers.

He said, “It’s great that the future of the venues is looking more certain for the time being, but if the people who work in the industry aren’t supported directly it’ll feel like we won thebattle only to lose the war.”

Arthur Brown’s Crazy World of Lockdown’s cover of The House Of The Rising Sun is released on 24th July and will be made available on the day across all platforms via the following smart link: www.CDBaby.lnk.to/HouseOfTheRisingSun .

The single is also available to pre-save on Spotify by clicking here: https://show.co/mIFuvvF

All proceeds raised from the single will be donated to the Help Musicians charity. To donate directly: https://www.helpmusicians.org.uk/risingsun