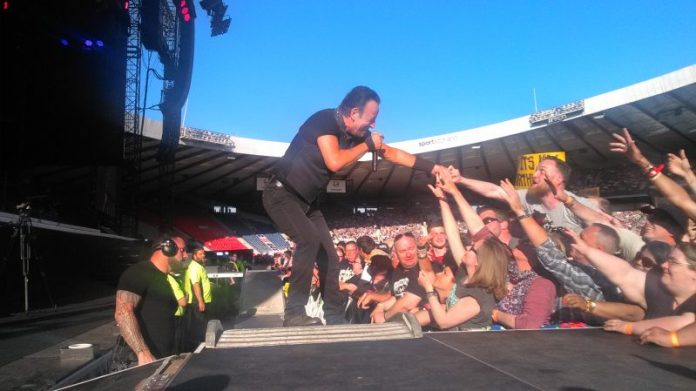 When UK dates for Bruce Springsteen’s River Tour were announced in February I quickly realised I could not make the Coventry show. I also surmised that the show would not encompass an entire 2 hours playing the 1980 double album from start to finish as they had been doing for 30 odd shows in smaller more fitting arena sized venues in the States.

Yet they were bound to play the one song I had always longed to see perform “properly” (without fancy arrangements or strings as had been the case on the Reunion Tour 1999) in one of Northern Britain’s major working class cities straddling a watercourse of renown. Glasgow was my chance to realise this ambition. Now when I first longed for The River to be played to the background of slightly inebriated Scots or Geordies, I kinda imagined it would be in a venue like the SECC or Barrowlands, but no, here was Springsteen virtually filling a 55’000 seat stadium at the age of 67 without a major hit single for decades.

So it was with anticipation I flew up to Scotland’s largest city and with time on my side took my place in the “pit queue” which involves several roll calls over the span of several hours designed to facilitate those with time and desire to access the very front spots within the stadium for a clear unobstructed view of the stage. Perfect for a wee chap like myself, not wanting to get stuck behind a 7 foot Dutch giant or a field of request signs as had happened far too frequently. This was the first time I had joined a pit queue. The first time I had queued to get in to see Bruce from early hours since 1999 in fact, having taken the easier option of sightseeing, drinking towns dry and a decent seat in the stands.

So, all in the stadium by about 5pm and the anticipation builds. At 6.45 Bruce and the E Street Band (in stripped down 7 piece form compared to the virtual orchestra he had assembled for the previous 3 tours to help overcome the passing of The Big sax man) opened with Waiting on a Sunny Day, which many predicted in the sweeps outside given it was sound checked quite a bit and (wait for it) Glasgow was in the grip of a mini heatwave! The 10 year old girl he got up to sing the lines was adorable as per usual but also very confident and boldly sang the words, finishing her piece by screaming Axl Rose style into the mic “Come on E Street Band!” We all know we are going to get a 3 hour plus show (3 hours and 27 mins it transpired) and the amazing thing is the entire set was played in sunlight.

After keeping the crowd rocking (but not too hard given the heat) with classics like Spirit in The Night, My Love Will Not Let You Down, Rosalita and the sunblushed Sandy (with River tracks interspersed within the set and tellingly played in sequence if not in full) the show took a serious turn with Death To My Hometown a Scottish Celtic hymn about the ravaging effects of latter day post industrial capitalism on places in America that straddle big rivers (think Pittsburgh). The vitriol and anger in Bruce’s face as he barnstormed through American Skin (41 shots) and Murder Incorporated hinted at events beyond the stadium that were clearly rankling Bruce and the band.

The centrepiece of this show was The River with Bruce acknowledging the very crowd and city across the pond this song was designed to connect with. Yes of course the song was written about the late 1970’s Jimmy Carter era recession but it painted a perfect picture of northern Britain in the very early Thatcher years, echoed by The Specials Ghost Town, that resonated with working class communities in places like Glasgow, Gothenburg and Gigon. Musically the highlight was the next song Point Blank followed by an hour and a half swing through some of the classics (to see Nils Lofgren whirling away to Because The Night is something to behold). Badlands, not Born To Run, nor Born In The USA (played here in all its original feisty might) is the song that binds this band and its audience together, provides the shared collective experience that anyone who has attended more than one show (and there are a fair few of those about) will testify.

Garry Tallent the bass player recently tweeted a picture of the crowd in Madrid and received several replies complaining about the lack of rarities in the setlist. Bruce and the band could play anything of 250 songs and has to tread a careful line to appease the setlist watchers as well as put on the greatest show for the first time attendee. “Stay hard, stay hungry, stay alive” are the words the crowd shout back at Bruce during a defiant solo acoustic This Hard Land that closes the show. Coventry, Wembley, you are in for one hell of a show!