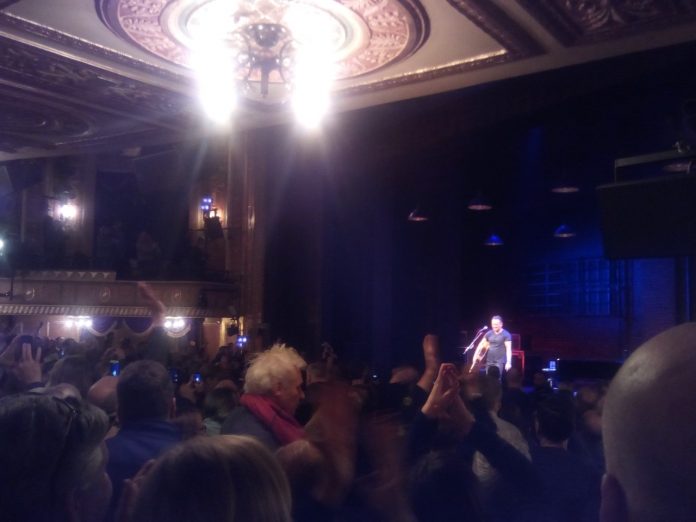 MV’s resident Springsteen nut, Mike, reports from the road as he returns to the US for the second time in three months for an audience with The Boss
It was with a sense of trepidation I decided to go ahead with my plans to attend the 26th December Springsteen on Broadway show. I had been very fortunate to attend a show in late October when, having already sorted flights in August, then failing to secure any tickets to a show the week I’d be over, I queued up and faith was rewarded that Friday with a fantastic seat beside my new Bruce buddy from Montana and sat right behind my favourite female singer songwriter Lucinda Williams up in one of the boxes.
No it wasn’t the venue that terrified me, nor spending a week in the freezing cold of NYC, nor being away at Xmas or even missing the not so mighty (sic…) Blues for a few matches. The show in October had been so wonderful and exactly the 2 + 2 = 3 that Bruce had been talking about the magic of rock n roll, hell, music and art itself can conjour, that seeing the very same show again seemed all of a sudden shallow and pointless. This show was and is meant to be a once in a lifetime opportunity for any self-proclaimed Bruce nut.
So how would this show be different? Well for a start there was no need to queue up for hours before so instead there was the boogaloo down Broadway through the huddled masses of Times Square one could participate in. Then there was a seat on the floor with the other tramps as opposed to the rarified box seat with the celebrities. The hooting and hollering between (and sometimes but not too often) during Bruce’s performance pieces was much more a feature this time, it was after all the day after everyone (including Bruce himself it would seem) had stuffed themselves with turkey and cranberry sour egg nog.
The opening 4 song blast of any Springsteen show is key – the bit you MUST not miss, whether it is on bootlegs from the Darkness tour or on trips to the smoke to see the reunion tour at Earls Court when it is perfectly acceptable to miss the last song in order to catch the last train back from Euston to New Street only to fall asleep and have to taxi it back from Wolverhampton, but just not on to miss an opening beat.  And here is no exception, Bruce is mesmerising as he begins to regale the tallest tale of them all through Growin Up, then a sublime spoken monologue introduction to My Hometown. It is as if Bruce is setting the chess pieces to his life story up in front of you. There’s the tree he would climb up into and out of the humdrum existence that permeated life in Freehold. There is Elvis, there’s always Elvis, reminding the world in the 50’s and 60’s it is okay to be young and innocent and want more of everything, just like Oliver Twist 100 years before him. There was the community of god, nuns, Italian and Irish family who surrounded Bruce (literally as it happens in the 5 or 6 houses around the Catholic church they all lived) struggling to shut down the Elvis phenomenon and keep Bruce eating green beans and doing his school work and doing his chores.
My Fathers House was the song that affected me personally the most when I saw the show in October, and even this was slightly different, still introduced with the idea he needed to wear his fathers clothes and speak with his father’s voice, only this time the song sounding more softly spoken, less terrifying, more shall we say Christmasy, and then The Wish counterbalanced the story of Bruce’s father’s red Mr Schmitz face with the pride he inherited from his mother about the way she carried herself in life and in work “she would talk to a broom handle, and gave the world far more credit than it deserves” Bruce repeated here before adding on this occasion “perhaps…” see Bruce has that Christmas twinkle in his eye too.
Getting away from Freehold, from the nuns and conformity and the beauty of the blank page and how Bruce misses being young enough to have that canvas laid out before him now characterise Thunder Road “I’m the guy who wrote Born To Run, it’s a death trap, we gotta get out!” “I live ten minutes from my hometown” and with the roar of laughter from the enraptured audience Bruce gives a “how did I wind up here” shrug of the shoulders. 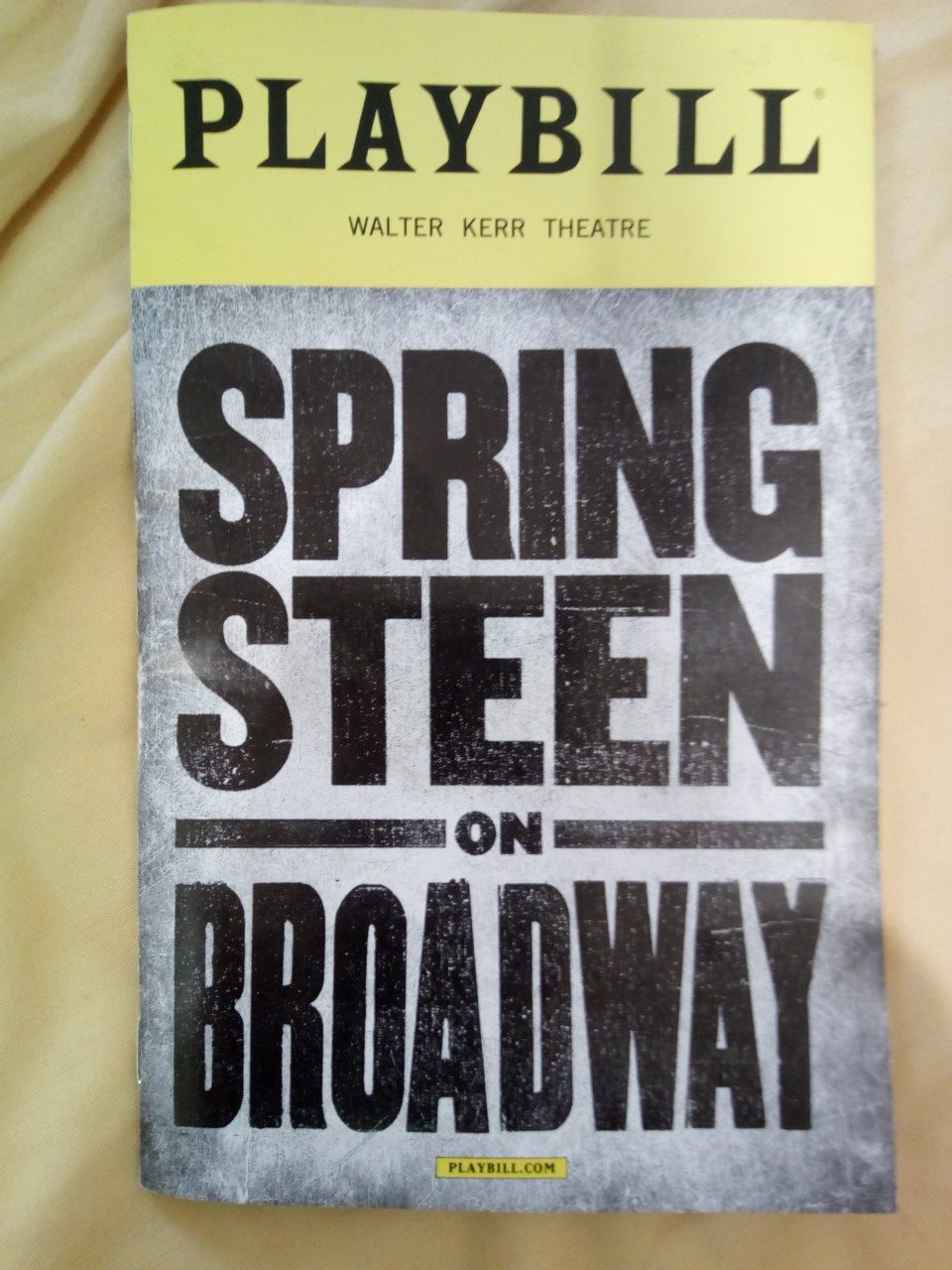 Now I read the first half of “Big Man” on the flight over on Xmas Day so Bruce’s introduction to Tenth Avenue Freeze Out really hit home as well as the performance of the song at the piano rekindled memories of the bootleg I have of the Tower Theatre Darby Philadelphia shows towards the end of the 1975 Born To Run tours in December. Bruce really misses the Big Man. It was the point of the show I almost had tears in my eyes. That hadn’t happened (to me at least) in October.
Unfortunately Patti Scialfa was unable to join Bruce for two songs (Tougher than the Rest, Brilliant Disguise) as she was laid low with flu so Bruce was gonna have to “swim solo” as he put it and altered the setlist for the first time in three months. A real wow moment for me as I began listening to the story of how his father approached Bruce in the very early 1990’s as Patti was expecting their first child. Doug offered an apology for being a lousy father and advised Bruce not to make the same mistakes with his children. Long Time Coming was played and I recall on the Devils and Dust tour Bruce had his son in tow at the Seattle and Portland shows and shared a change of lyrics joke his son told him “I feel another one kicking inside. And I ain’t gonna fuck it up TOO BAD this time” The other new song was played without any introduction “The Ghost of Tom Joad”
The only song that seems out of place in a performance autobiographical in nature is Promised Land introduced as a way of showcasing his lasting love affair with the desert. Bruce reminded us of Martin Luther King’s words before stating things have gone too far now enough is enough with the whole Donald Trump thing “The arc of the world tends towards progress despite annus horibilus like 2017” Born To Run was played in a bit more of a hurry (get home to see the wife and family) but still a gorgeous acoustic version.
The show has had a 3rd slew of dates added and currently runs until June 30th 5 nights a week for the most part. Bruce commented at the start that he had never before in his life worked 5 days a week and joked he didn’t like it all that much now.