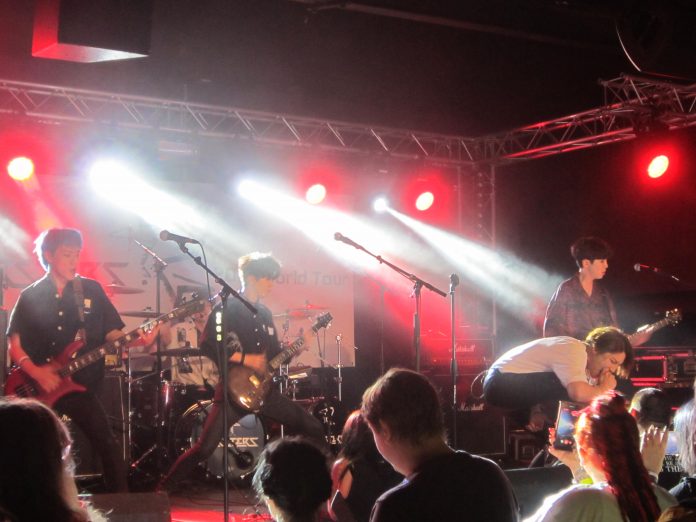 The group first appeared on South Korean television talent show series Superstar K6 in which the band finished in the top six as the first-ever heavy rock band in Superstar K6 to do so. The band is also the first Korean artist to have been included in the weekly radio playlist of the legendary British rock magazine, radio, and TV station Kerrang with their newest single Barriers. The group are the first Korean Metal band to tour the UK on a five-date trek as part of their `K- Rock Revolution World Tour.

The fellas arrive on stage after a pre-recorded vocal introduction that sets out what the band are about and what they see as a world full of confusion and discrimination that needs some dramatic changes, They head straight into their recently released double A sided single `Hero` a thumping, grinding and intense slice of hardcore rock to really lay a marker down, The next couple of tracks, ` Scarface` and `Here I Am` come from the band`s debut album, Live In Hope, released in 2017. The former track, although quite aggressive has a memorable chorus of “I Remember You” and the latter a more melodic offering with the twin guitar players Junyong Ahn and Gyejin Lee really coming into their own. We have a new song called `Hot Summer` before the guys share a cover of the Korean boy band BTS song “Euphoria` and an excellent cover of Linkin Park`s `New Divide`

`Dreamer` has the faithful clapping along to this atmospheric cut and is followed by `Dreamer II` which is almost a reprise of the same tune before they play a new song with the melodic and nicely paced `Arabian Night` The other double A side single `Barriers` gets an airing with its lyrics referring to discrimination. The show closes out with `Falling Into the Sky` which starts with a programmed ticking before the band pump out quite a grungy refrain and `Lost Child` with it`s memorable chorus of “falling down” which has lead singer Daegun Roh heading down into the crowd and taking selfies and singing into the audience`s cameras. This song allows the powerhouse of the band, bass player Hwanhee Jo and drummer Taehee Jo to shine.

There is an encore of sorts with the track “Disappear` but not before the passionate and expressive frontman Daegun Roh encourages the intimate and highly enthusiastic audience to shout in Korean “One More Song” which seemed to be “Han Gog Deo” then that`s it and this intense debut appearance of these Korean rockers is over. This was a cracking gig with driving metal riffs mixed with instantly memorable melodies and at times, screamed vocals. The band mix the very best of metal in an explosive live performance which i`m sure is honed from their consistent touring across Korea.

I was delighted to witness what i`m sure will be the first of their many excursions to the UK.