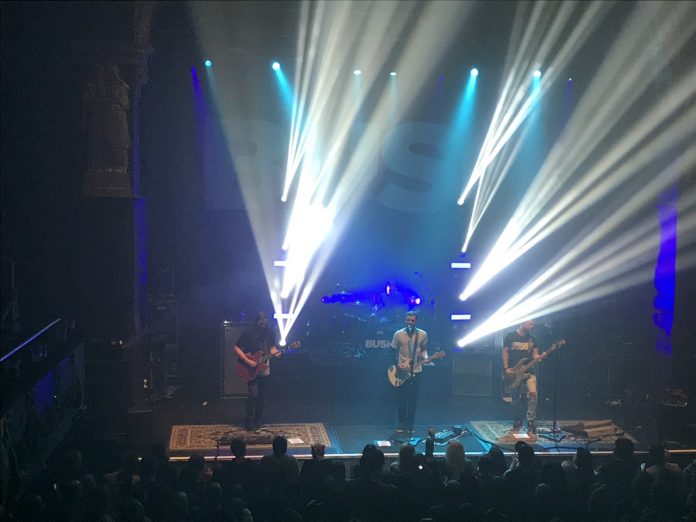 Without straying too much into dodgy 70’s sitcom territory, it is perhaps, kind of appropriate that Oli Brown – one-time blues protégé now frontman in full on rock n rollers, RavenEye –  is standing below a sign that says “Bush” in giant letters, when he says: “we’re popping our cherry tonight, Birmingham”. We think – we hope – he is referring to the fact that the three piece have never played the city before, but you never know. Anyway, they’ll be invited back – and with their name on the top of the poster. Because make no mistake this was an incendiary display from a band with so much talent and charisma it’s not fair on other support acts. Starting with, well, “Get It Started”, a strutting, thumping grooving thing, and with “Hate” doing likewise, the band are a mighty proposition even before Brown ditches his guitar, climbs onto the drum riser and they channel some primal Royal Blood-like instincts on “Nobodies Soul”, after that they shift gear and are essentially unstoppable. “Hero” is a hard rock song done right and whilst Brown getting on the shoulders of bass player Adam Spiers to play “Hey, Hey Yeah” might be a bit of a gimmick, it’s a brilliant one. The last song they play here is called “You Got It” and they really have. Cocksure swagger, presence and killer songs. It’s all here. Just watch RavenEye fly. 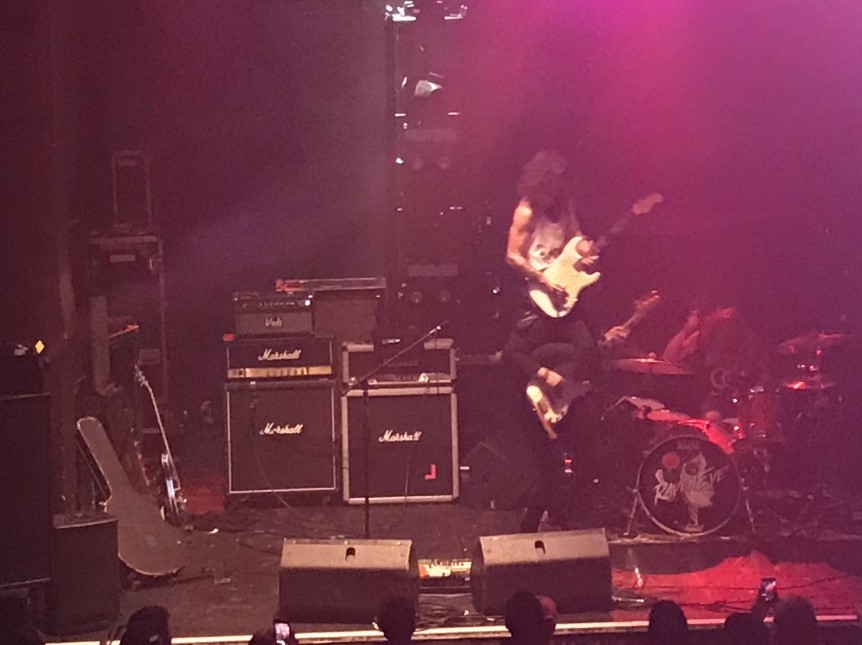 Britain’s biggest rock exports of the 1990s, Bush sold 10 million records over in the US. That success, maybe, was never quite replicated in their homeland, but at least singer and guitarist Gavin Rossdale can see the funny side. “It’s been a pleasure,” he says, near the end of their set. “How they fit 10,000 into a room this size is beyond me….”A couple of thousand Brummies have, however, packed into the Institute and they are rewarded richly.

A light show that belongs in enormo-domes sees the band bathed in darkness as the unmistakable strains of “Everything Zen”, the very first song on their very first album, “Sixteen Stone”, now a staggering 23 years old, usher them in.

The ravages of time and the break up in the early years of this century mean that only Rossdale and drummer Robin Goodridge remain from the start, but Chris Traynor and Corey Britz ensure this is anything but a nostalgia trip. As if to exemplify this, the band are playing a brand-new song, “This Is War”, fourth song in. “You’ve got to keep it fresh,” Rossdale points out.

The result is as far removed from the cold and calculating greatest hits thing as you can imagine. “Nurse” a song from their latest album, is in early, and all their career is here, and finds Rossdale in particularly ebullient form – especially when he ditches the guitar and almost literally seems to jump for joy.

“The People That We Love” is a real highlight, as are “Prizefighter” and “Greedy Fly” – all of which goes a long way to ensuring there is no mid-set lull here. And after a run of newer material towards the end there is a knockout crescendo of “Little Things”, which sees the singer in the crowd, meeting his people and looking completely at ease.

Professional to a fault, the encore serves as a reminder as to just how many top-quality songs the band had. “Machinehead” a stripped down “Glycerine” – Rossdale handling most of it before the band joins him at the end – as well as the evenings one cover, REM’s “The One I Love.”

A night that belonged in an arena ends with a soaring arena rocker. “Comedown” has been sung to millions around the world, but right here, tonight, it sounded as fresh as ever. And that sums up Bush circa 2017. Not content to rest on their laurels, and good enough not to have to.