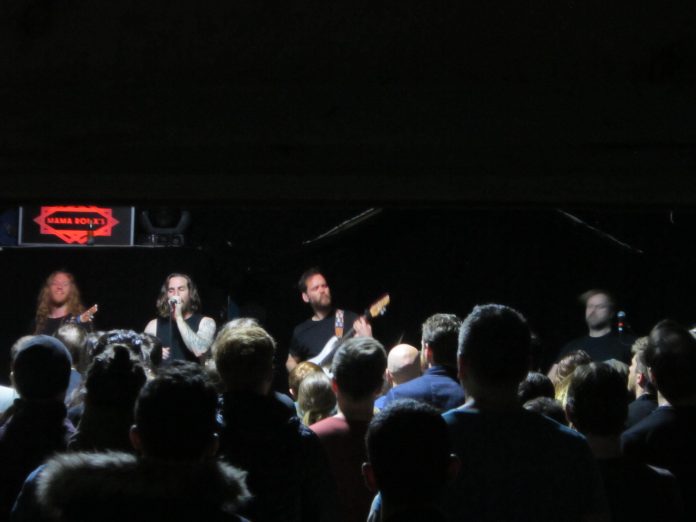 Formed in Brisbane, Caligula`s Horse, named after Roman Emperor Caligula`s prized horse Incitatus, whom the Emperor had planned to make a consul arrive to perform their debut show in Birmingham to promote their latest release “In Contact” A fairly full venue awaits the band who are headlining a package called An All Aussie Invasion with fellow cohorts I Built The Sky and Circles. I arrive and catch the last couple of tunes from Melbourne based I Built the Sky. Their music is billed as Cloud Core and the numbers I caught were wonderfully structured instrumental progressive rock, in a similar style to Joe Satriani or Steve Vai. What I heard I really enjoyed and was a little disappointed to only catch the latter part of the show.

Fellow Melbournians Circles were up next and understandably this nigh on fifty-minute set was dominated by tracks from their recent release “The Last One” The band have weathered the storm of a departed singer with guitarist Ben Rechter taking over lead vocals alongside long term members Ted Furuhashi (guitar / backing Vocals), David Hunter (drums) and Drew Patton (bass guitar / Screamed Vocals). The band although having many progressive metal elements are a more hardcore, angry cum brutal prospect live. The guys open with `Breaker` from the recent release but the outstanding tracks for me were `Dream Sequence`, `Erased`, `Tether` and `Arrival` I must admit I’m not a great lover of screamed or growled lyrics but the few times tonight that these were shared it seemed pretty much in line with what was required. There were some terrific riffs tonight in this intense offering. Queenslander`s Caligula`s Horse hit the stage and open with what is probably my favourite track `Dream The Dead` eight minutes of pure heaven from the opening intricate guitar reflections to Jim`s hypnotic vocals throughout. `Will`s Song` follows and is a faster paced thrashier offering. The show progresses with `Dark Hair Down` from their second album before we are asked to vote on what the guys will play next, either `Rust` or `Turntail` from the “Bloom” album. `Rust` wins out by a large margin. A CG show seems to be as much an event to participate in as much as watch, as again the faithful are encouraged to sing “We are all” as the band storm into `Songs For No One` Again the band are here to promote their last release and share the breath-taking `Fill My Heart` from their fourth record “In Contact”. The album is a conceptual work discussing the nature of art and creativity, a celebration of what connects us as human beings but although not all the album is played, the individual cuts stand up well alone. Headlining this tour allows the guys to indulge in something different and they offer up `Graves` a piece that runs at nigh on fifteen minutes. The spellbinding `Bloom` is shared before `Marigold` closes out the set. It`s not long before the troupe Jim Grey (lead vocals), Adrian Goleby (guitar), Dave Couper (bass/Vocals), Josh Griffin (drums) and Sam Vallen (lead guitar) return for a one song encore with `Inertia And The Weapon Of The Wall` An intricate diatribe on the dangers of revolution and the need for direct, communal, political action part spoken before the band join in.

This was a cracking show with some very intense, intricate and ingenious musicianship showcasing some thoughtful and intelligent lyrics. Tonight`s event was staged on the cusp of Bonfire Night and the place was certainly lit up with plenty of fireworks.