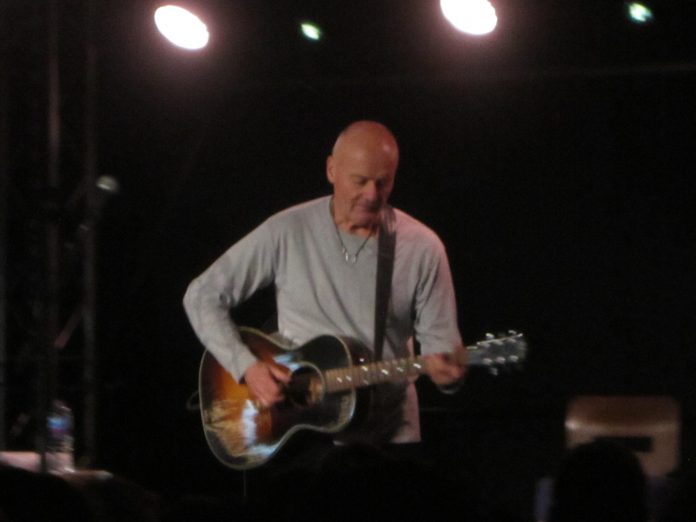 Creed Bratton  may be best known for starring as a fictional version of himself on nine seasons of the award winning American version of “The Office”  But he is also an established musician with a career in music that spans nearly five decades and was a member of the legendary American rock group The Grass Roots. He`s trekking around the UK and the show is promoted as an evening of music and song.

There`s no fanfare as Creed arrives on stage with his acoustic guitar and with minimal fuss plays the quite melancholic `Where Were You When I Needed You` a Grass Roots track from 1966 about the demise of a relationship. In between songs we get Creed`s highly amusing musings on all sorts of subjects such as marmite. bizarre emotional support animals allowed on planes and the adult entertainment movie industry. Almost everything is up for grabs.

After a story about his aborted attempts to get a tattoo, well he was technically a rock star, had, had earring and crazy clothes so it`s expected, he relates a tale of an acquaintance with the song `My Name Is Leon`

There`s a new album, his ninth, due called “Slightly Altered” and we get a taster with `Is That You Shining` before another Grass Roots track `Temptation Eyes` which has a real sixties feel about it. Grass Roots played the legendary Whisky a Go Go venue on the Sunset Strip with The Doors and Nancy Sinatra also on the bill.

Songs such as `I`m Not Comfortable`, psychedelic `Chemical Wings` and ` Heart Of Darkness` are shared along with hilarious anecdotes about drugs like acid and being a sex symbol in the sixties.

A member of the audience takes to the stage to hold a sheet of lyrics to The Office Theme tune with references about the cast as we spectators are encouraged to hum the tune,

The show closes out with the heart breaking `More Than You Know`, the anthemic `Side By Side` which may or may not be a single from the forthcoming release and `All The Faces` the song that was played as the Office series came to an end.

Mysterious, eccentric, good-hearted, and downright talented are all words that have been used to describe actor and musician Creed Bratton over the years and having witnessed tonight`s performance, I’d say that`s not too far wrong.