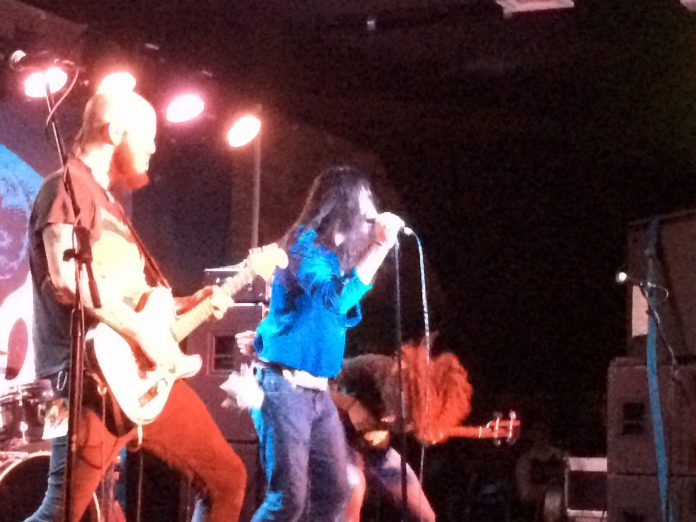 Pennsylvania’s finest make a stop off in Wolverhampton


So, the night was already not going as planned when Scorpion Child had to pull out due to ill health, when someone (male it should be added) shouts out: “Brandon, I want your babies…..” Lesser men than Brandon Yeagley, arguably the finest modern frontman in rock and roll, of probably the finest modern band in rock n roll, might be knocked off their guard. Not him: “yeah, man, let’s curl up and do it like Seahorses, that way we both get pregnant, you feel me?”

Welcome to the madcap world of Crobot.

To go back a year or so, a tweet arrived asking if we’d review an album by a Pennsylvanian rock band. The record, “Something Supernatural”, was just about as good as debut full lengths go. Stunning just about, but far from completely, covers it. Then they turned up as opening act on Black Label Society’s UK shows back in the spring and it was clear that Crobot were actually better live than on record.

Expectations, then, are pretty high for this the second show on their first headline show of the UK and those expectations are hardly tempered by the opening song “The Legend Of The Spaceborne Killler”. From the off Yeagley is the hip shaking, classically athletic frontman of folklore, but also Bass man Jake Figueroa (who forms the rhythm section with his brother Paul) acts like a kind of human study in perpetual motion.

There are moments when Crobot live become something not supernatural, but exceptional. “Nowhere To Hide” is a song so good that it wouldn’t need much to make it stellar live, but it surpasses that here. There’s the wailing, flailing, “Skull Of Geronimo” and there’s the mighty slam of “La Mano De Lucifer” but there’s something else too.

Because rather wonderfully Crobot have decided that laurels are not for resting on, and have set about writing a truckload of new songs. To their eternal credit, they air a load of them here. “Welcome To Fat City” possesses a dirty, greasy groove –  courtesy of guitarist Bishop who is something of a master of them –  that is finger lickin’ good, “Serpents Shadow” slinks and slithers, “Hold On For Dear Life” is bluesy perfection and “Easy Money” sees Yeagley add his harmonica chops and insist that people chase him.

They end with “Fly On The Wall”, an old favourite, which gives the frontman one last excuse to unleash his voice – somewhere between Robert Plant and Chris Cornell, with a touch of Wolfmother’s Andrew Stockdale – but there might have been a sit in protest had they not returned.

They do, for the huge “Cloud Spiller” and the soaring “Wizards” with its “you’ve got to slay a few dragons before you get to the princess” refrain before finally calling it a day.

Everything is in place for Crobot to be very, very big indeed. Both their songs and live show are phenomenal, they proved that again here. And bets are already off for the best album of 2016.

HEART OF THE RIOT