If a week is a long time in politics – a phrase probably too literal right now – then a year is definitely a lifetime in rock n roll. Last May was the last time I clapped eyes on the Cannock rock n roll band then called The Bad Flowers. Since then they’ve changed their name, singer/guitarist Tom has had a haircut, and they have – slightly changed their sound. Nothing radical, you understand, because if you liked them before, then you’ll love them still, but there’s a detectable harder edge to the new stuff. And there’s a lot of new stuff too, but only after the title track of their last record, “Starting Gun”. “Are You Ready?” swaggers along on the back of a Dale Tonks bassline, latest single “Hear Me” sounds like that title is a demand not a question, and the likes of “Beast” – another new track – suggest that the new record, released later in the year is going to be one to look out for. In between that, they find the time to play “Secrets”, which in this set probably ranks as an oldie albeit is just a year old. They finish with a track that is getting on a bit – in relative terms anyway – and “City Lights” sound as good today as when I first saw them play it, around three years ago, not far from here, when they opened for a band called Crobot. I predicted big things for Bad Flowers that night. For Wolfjaw I still am. 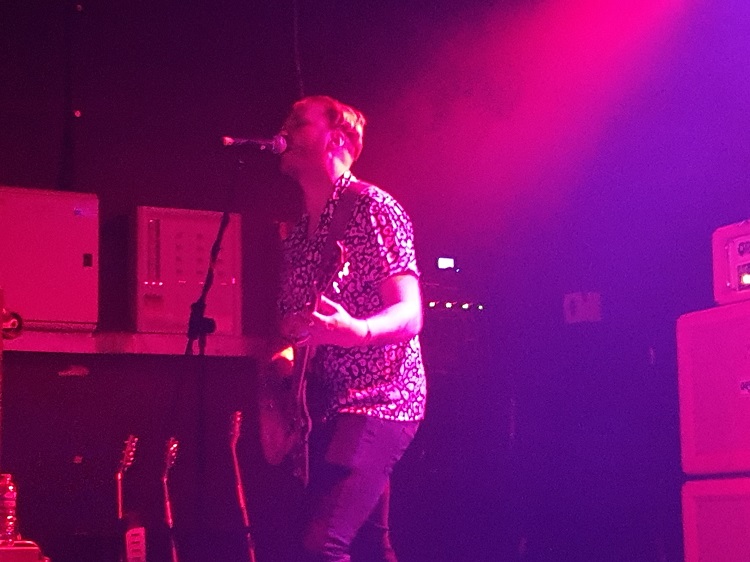 “Oh, it’s been far too long, Birmingham, baby. The way I see it, we’re like ex-lovers who picked up right where we left off. We have learnt some new tricks along the way, but we still know how to touch you right where you like it……”

In England we just say hello, but Brandon Yeagley, the singer, MC, dervish and dancer that fronts Crobot, kinda has a point.

This is a new look band for a start seeing as the Figueroa brothers – the bands erstwhile rhythm section – have departed since they were last here. So, whilst there is a subtle shade of difference to this, when Yeagley roars “The Legend Of The Spacebourne Killer” and “Skull Of Geronimo”, there’s no mistaking the boys are back, back, back and intent on making up for lost time.

One of those weird tours where the band are a month away from sticking an album out (I’ve heard it, it is stunning) so they are playing songs a lot of people don’t know, “Keep Me Down”, however is an early foray into “Motherbrain” and it’s a cracker.

The main draw, though, with Crobot – in a live arena certainly – isn’t necessarily the songs, it is the performance. There is a real feel that this is a band who just loves playing live. Yeagley and guitarist Chris Bishop go for a crowd-surf in “La Mano De Lucifer” and Yeagley is in rare form throughout.

“Plague Of Mammoths” is a rare dip into “Welcome To Fat City” – the album they stuck out a few years back – as largely this concentrates on the new and the old. “Cloud Spiller” is the latter, “Alpha Dawg” the former and both are just perfect. And “The Necromancer” sounds like it is so sleazy it might, if not quite get it on “Cold Ethyl” style as it were, then it’d at least give the dead a tickle.

It is interesting, actually, how seamlessly the new tunes have fitted into the set, “Low Life” in particular – replete here with a reggae interlude – sounds like it is an old favourite already, although the end with one that is. “Nowhere To Hide” arguably still their best song. After which there is no encore. They don’t need one. They know they are rock stars. They just need everyone else to catch on.

That is taking longer than you might have thought – and they might have hoped themselves – but you cannot keep a band this good out of the mainstream much longer. Crobot are coming for you. Take that in any way you want to.