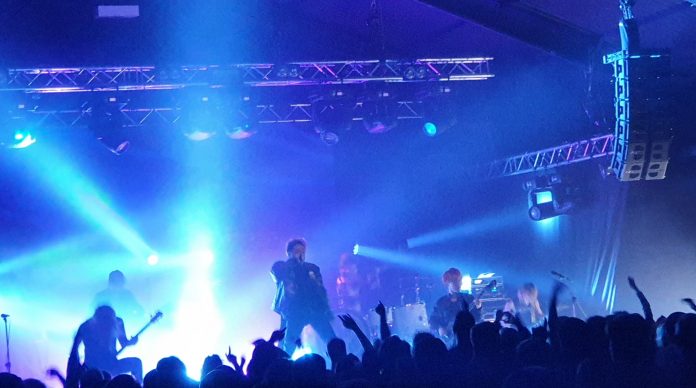 When Black Futures finish there is an audible hum in KK’s Steel Mill, a kind of collective “WTF”. I get it, I had the same feeling when I reviewed their “Never Not Nothing” album last year. I gave the thing perfect marks. The review ended thus: “one of the records of the year. It really is. Even if you probably won’t have a clue why.” Move that into a live setting and the feeling is more that you haven’t got a clue what you’ve just witnessed. This is not a gig. It’s a nihilistic bludgeoning of the senses. Right from “Love” to “Trance” and everything in between, this is not like anything else. Space finds tones on his guitar that others can’t and Vibes isn’t so much a drummer as an attacker of the kit. Samples fly at you from everywhere, and member number three, standing there menacingly in a radiation suit and dark glasses, gives Space safe passage to the floor for the pummelling “Riches”. He  also holds Space’s mic during the driving, punk brilliance of “Tunnel Vision” and as Vibes dismantles everything in sight in “Trance” and Space stands on a platform behind him clapping, you could, if you want, see it as an example of the deconstruction of society in the post-truth age. Or you could realise that Black Futures are the most original and compelling thing there is. Either is good. The answer to the WTF question, you know, is surprisingly easy: You’ve just been NNN’d. 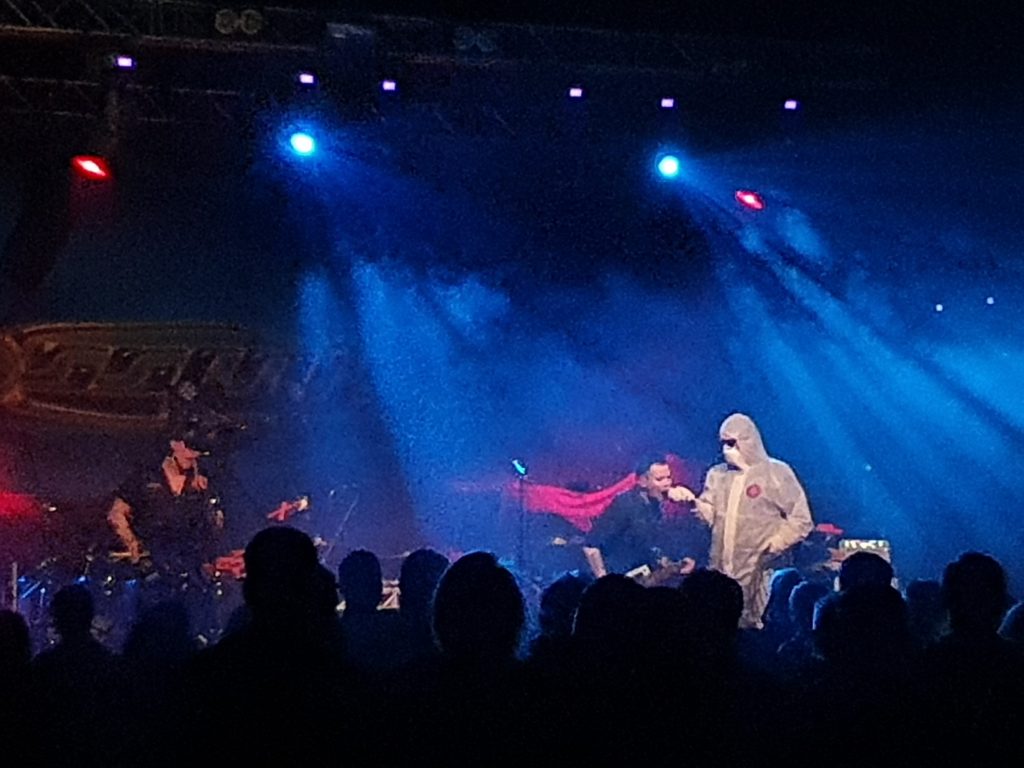 “We are for the freaks, the weirdos, the people that don’t fit in, we welcome you all” so says Ocean Grove’s singer Dale Tanner. From Melbourne, they are here to bring some summer to our freezing March night – literally given that one of their songs is  “Sunny” from their forthcoming new record. No one told guitarist Matthew Henley either because he does this with his top off. If the new single is pop punk then the  rest of it is like a melting pot where everything gets chucked in. “Junkie$” is bouncier than a box of frogs, but their misfit anthem “The Wrong Way” is gentle. Another of the new ones “Thousand Golden People” has a whiff of Faith No More about it and “Ask For The Anthem” is well named. Judging by the hands that go up in the air when Tanner says: “who’s seeing us for the first time, who is coming back?” Their career is about to lift off. And given they have a chap kicked out for anti-social behaviour before the end, you’d best believe, OG walk it like they talk it. 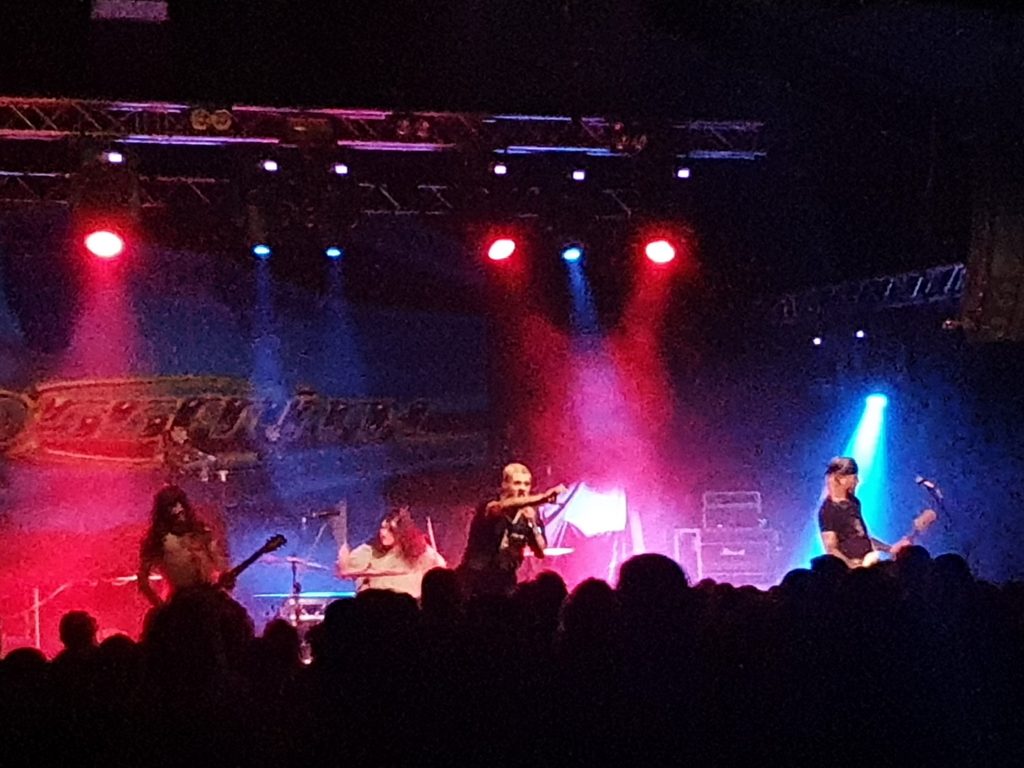 “The show starts in ten minutes” says the PA , as something that sounds close to the Prodigy blasts out. Then eight, then five….and then we get to zero.

Of all the bands in all the world, Japan’s crossover boys know how to make an entrance. Each member of the band races on individually. Like some returning heroes from a war, they are merely ready for this battle.

Let’s get this right, energy, vibe, feeling. That’s what Crossfaith thrive on. The place goes wild way before “Jagerbomb” engenders a circle pit of a epic proportions.

Someone throws a can at singer Kenta Koie before “Kill Em All” and he asks that they come to the stage in a manner that suggests he’d enjoy the tear up. Instead he gets plenty of crowd surfers.

It is surprising, perhaps, just how heavy this is. “Freedom” has a bass sample that shakes the whole building and these are not breakdowns. They are beatdowns.

The electric pulse of new single “Endorphin” is met with a crushing riff from Kazuki Takemura and “Omen” a Prodigy cover, dedicated to Keith Flint, makes perfect sense.

There’s one of those “get down on the floor to jump up” interludes, and it goes superbly, before “Countdown To Hell” ends the set.

Encores, though. Yeah, Crossfaith got em. And they come out swinging with even more energy with “Catastrophe”  and “Leviathan” forgets its power metal grandiosity, to flatten the rest of the place. In an hour, the band have smashed down any barriers that ever existed.

Crossfaith, then. Whatever else you can say, there’s no denying that a) they are very good at what they do and b) they are a metal band.

That’s why The Prodigy cover earlier, you know, that resonates in all kind of ways. I’m old enough to remember the furore that was whipped up when Kerrang! Reviewed them for the first time. Jesus, it made Brexit look like a lot of fuss over nothing.

Fast forward twenty years and the lines are blurred to the point that no one cares. It makes nights like this possible. Who knows exactly what just happened since 7.30pm? Just know it was as compelling as it gets. That’s all.