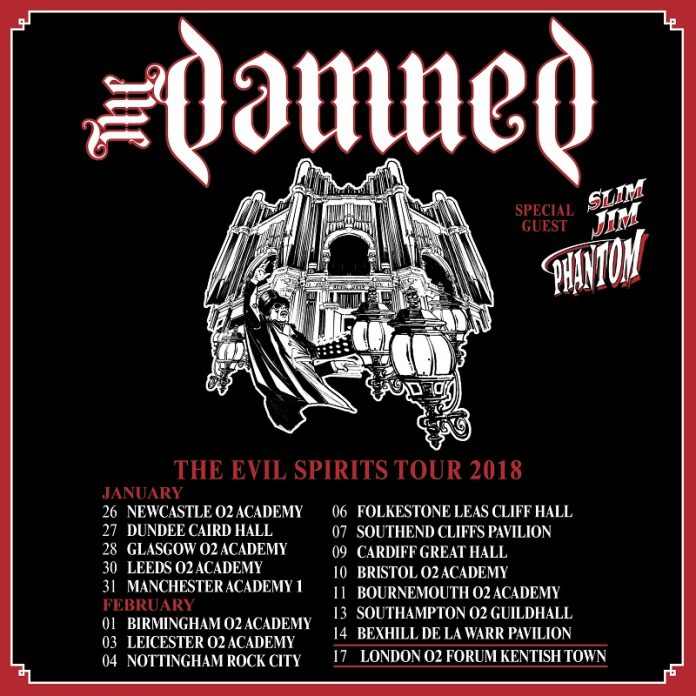 A healthy crowd awaits the band, as this show has been moved to the biggest room at the Birmingham Academy. The lights dim and we get a sort of Dick Barton-ish theme tune playing through the speakers as the boys arrive on stage and Captain Sensible, in his distinctive red beret and red striped t shirt, reminiscent of Dennis The Menace greats us with “Hello Birmingham, home of Black Sabbath and GBH, they`re here tonight ya know” I think he means Birmingham`s premier punks not Ozzy and co and launches into `Wait for the Blackout.`

Well the Damned are touring and have a forthcoming album to promote named “Evil Spirits”, their first release since 2008`s “So, Who`s Paranaoid.” the much-awaited album is produced by the fabled Tony Visconti.

The band these days comprise former gravedigger, founder member and lead vocalist Dave Vanian, Captain Sensible otherwise known as Raymond Ian Burns, the guitarist who took “Happy Talk” to number one, and who in September 2006 and formed a new British political party known as the Blah! Party, who joined the band in 1976, left in 1990 and re-joined in 1996. Paul Grey, bassist who has re-joined the guys in September last year after the departure of Stu West but had been a member throughout the eighties. Monty Oxymoron, on keyboards who joined in 1996 and drummer Pinch who arrived in 1999. I`m sure this troupe needs little introduction, only to say that they were at the Spearhead of punk with The Sex Pistols and The Clash. They were also the first British punk band to release a single, an album, have a record hit the UK charts, and tour the United States

`Dr.Jekyll and Mr Hyde` highlights what a really great voice Mr Vanian has, a very thematic song, one which you could imagine in a sixties film. The almost psychedelic` Under The Floor Again` with it`s superb guitar solo follows before we get the straight 2, 3, 4 punk `Anti-Pope` from 1979`s experimental “Machine Gun Etiquette” album. `So Messed Up` gets a blast before that legendary line is spoken “Is she really going out with him” and it`s into the wonderful `New Rose` and the place goes into a frenzy, Can it get any better? The answer is yes and the fellas play `Love Song` The show progresses with some old and new favourites that include the magnificent cover of `Eloise`, new song `Devil In Disguise`, `Ignite` the throwaway `Dozen Girls` before rounding off with the cracking `Neat Neat Neat`

We get a couple of minutes break then the guys return to share the wonderful instrumental `Seagulls` before the inevitable song to close it all out with, the classic `Smash it Up.”

A quick “Birminum you were way fucking better than Manchester last night” from The Captain and the band are gone, this was a great show from these Punk rock, gothic rock, post punk pioneers. It`s hard to believe that  they`ve been going since 1976. Dave Vanian is almost the epitome of the picture of Dorian Grey.

It must have been thirty years since I last saw this band and they are still as fresh as ever. The definition of being Damned is being condemned or doomed, especially to eternal punishment – if it was listening to these guys I’d take that.