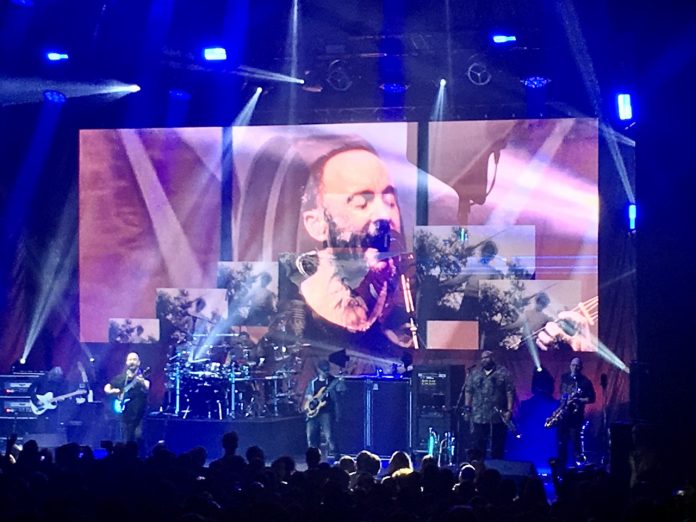 It’s been four years since DMB hit the UK and in my opinion it’s been way too long, I’ll be brutally honest…..I absolutely love this band and have no problem travelling to see them whenever they hit these shores, I will say though that as it’s been 9 years since the band have played Birmingham & 10 years since they hit Wolverhampton…..a Midlands date is long overdue.

What you get at a DMB concert is a masterclass of musicianship, a song that is six minutes long one night could very well be eighteen minutes long at the next show, the DMB don’t exactly follow any kind of rules…..they play by feel, and that is what makes them one of the greatest live bands on the planet.

‘Seek Up’ is the opening song of the night and at almost twenty mins long is an interesting introduction for any newbies tonight in Hammersmith, this is followed by the powerful and completely brilliant ‘Don’t Drink The Water’…..a song that every time I hear it gets the hairs standing up on the back of my neck, such is the passion that Dave puts into each word.

It’s my tenth time of being in the same room as Dave Matthews (8 as the DMB and 2 under the Dave & Tim mantle) and I’ve never seen anything that even resembles a similar set list to the previous show, I was blown away by the storming version of ‘Louisiana Bayou’ a track I’ve not seen live since 2007…..’You Might Die Trying’ & ‘Samurai Cop’ were utterly mesmerising…..what a show this was turning out to be.

The bands version of The Zombies ‘Time Of The Season’ is always very welcome in the set and this was followed by the brilliant ‘Stand Up’ in which Dave prowls around the stage with his now trademark crazy dance moves, all this as he gives those guitar strings a real work out.

‘Excellent versions of ‘Can’t Stop’, ‘Lying In The Hands Of God’ & ‘Funny The Way It Is’ were played on the home straight of the show before the opening bars of my personal favourite track ‘#41’ filled the hall…..there are good tracks, there are great tracks and then there is ‘#41’……it’s only been the fourth time I’ve visited this wonderful venue but I’ve never heard anything sound as good as this song did tonight in this hall.

‘Rapunzel’ was the final track of the main set…..a real fan favourite and it was lapped up by the not quite but as near as damn it capacity crowd, the encore was a two song affair…..’Sister’ and the DMB’s well trodden version of ‘All Along The Watchtower’……and then that was it, night one of a two night residence done & dusted, I feel rather envious of the folk who have tickets for the second show!!!!

My only complaint of the evening is that I really wish that people would not use concerts as an opportunity to have stupidly loud conversations with their friends……you know who you are, so do us all a favour and go down the pub instead, don’t ruin other people’s evenings with your boring stories of meetings & office politics…..because we really don’t need to hear it at a concert!!!!