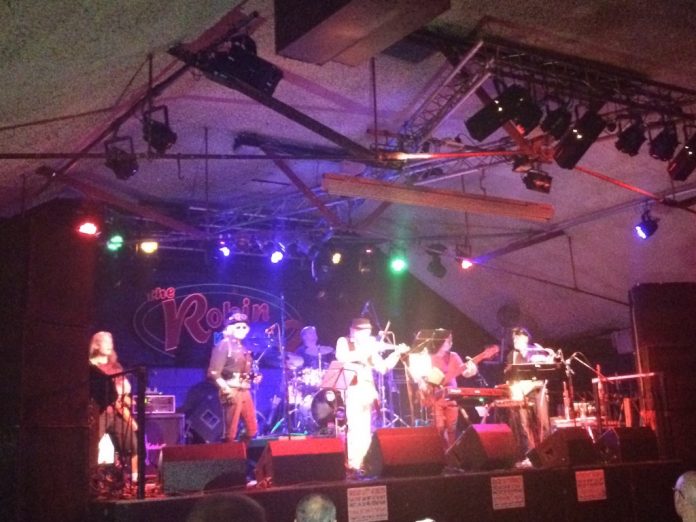 From Starless to Starless and everything in between

David Cross once of King Crimson, is standing on the stage on a hot evening in the Black Country, explaining for half an hour or so he’s going to give some classic material a different slant. So “Starless” by King Crimson is played as a solo violin piece, while David Jackson of Van Der Graaf Generator soon adds his inimitable presence on all kinds of wind instruments and keyboards, with their version of “Sure Of The Dark” seeing the pair really cut loose and enjoy themselves.

It’d be fair to call that the starter but also add that when the main course arrives 20 minutes or so later it is quite the feast. After all, not many gigs start with a drum solo. This one does, and probably proves that not many drummers are as good as Steven Wilson cohort Craig Blundell, but, although the level of musicianship on view here is incredible, this is not a show that is all about widdly wizardry, instead it’s just a thoroughly entertaining romp through some mighty fine songs.

Songs like “Nurse Insane” and “Over Your Shoulder” (“from the distant past, I can’t even remember which albums they are off”, jokes the avuncular Cross) but crucially it isn’t a set that wants to wallow in past glories either.

Cross has a new record about to drop and uses the chance to try out a clutch of the new songs. Not least the brilliant new single “Starfall” and “Sign Of The Crow” it’s title track. It is, however two of the other new tracks that really take the eye. “The Pool” features stunning interplay from Cross and guitarist Paul Clark as the violin and six string mesh to wonderful effect and the epic “Rain Rain” which gives the Steampunk influenced singer Jinian Wilde to the chance to show his full range.

Amongst all this, things are brought full circle with a fine band version of “Starless” to compliment the one from a couple of hours earlier and when they encore it’s with a thumping take on the King Crimson classic “21st Schizoid Man” which is a fitting conclusion to a mighty evening.

The band here has an incredible past. They delivered a performance here to prove why they are right to carry on into the future. A show of great warmth (in every sense) ended up being one to cherish.