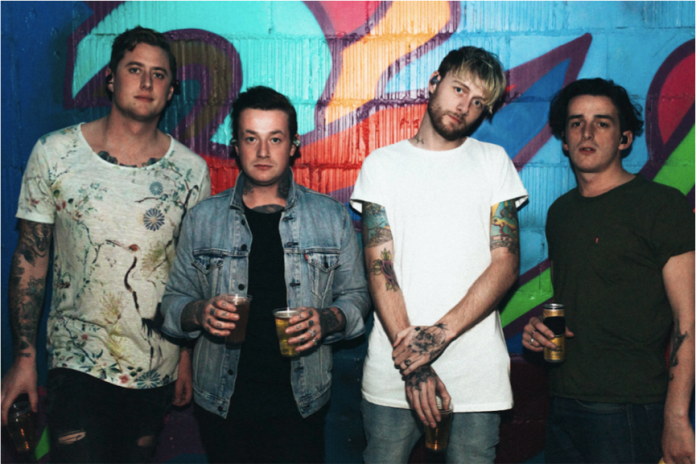 Deaf Havana today announce the release of their live album, Deaf Havana Live At Brixton Academy. The 21-track live album features songs performed at their monumental, raucous Brixton Academy date which took place in December last year to a huge crowd of over 4,500 people.  The show marked their biggest headline gig to date and saw a truly electric atmosphere that was unforgettable for the band and those fans in attendance.

Deaf Havana Live At Brixton Academy will be released on 15thMarch and will be available digitally and on double CD. The x2 CD digipak can be pre-ordered now from https://liveherenow.co.uk/products/deaf-havana-live-at-brixton-academy.Keen to always give back to their fans, the first 500 copies pre-ordered will be signed by the band. Deaf Havana also wanted to give fans an extra treat as soon as the album was announced. Upon preordering the album, fans will get live audio track Hell – Live At Brixton Academy, as an instant grat immediately.

In talking to the fans at the show, Deaf Havana frontman James Veck-Gilodi said: “This is a milestone in anyone’s career, we’ve had it not tougher then anyone else, but it’s been a weird journey, and if you grew up where we grew up, to do this is unheard of! So thank you, it’s only down to you we’re allowed to do this. I cannot express my gratitude enough”.

As well as the forthcoming live album release, these next couple of months see Deaf Havana storming Europe with a series of sold out shows and then kick off their UK & Ireland tour at Cardiff’s Great Hall on 15th March. They will make their way around various cities including Nottingham, Glasgow, Manchester and Sheffield before wrapping the tour at Dublin’s Green Room on 31st March. Of the upcoming tour, front man James added, “We are all so excited to get back on the road as it will be over two years since we did our own headline run in the UK, and even longer since we played in Belfast and Dublin, can’t wait to see you all again!” For more information and to buy tickets, please visit their website here.

The UK pop rock-outfit released their fifth studio album, Rituals last year via SO Recordings. It scored them their second consecutive UK Top 10 album, featured Singles Of The Week on the likes on Radio 1 and Virgin Radio, and garnered support from some of the UK’s most esteemed publications. They have also picked up a huge amount of success on streaming platforms such as Apple Music, Amazon Music and Spotify, where Holyand Sinnerhave been streamed over 3 million times. Listen to Rituals here.