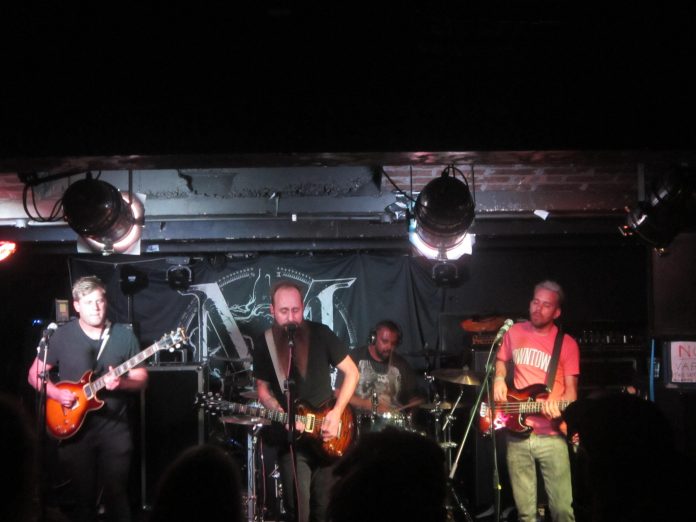 Deity`s Muse is a melodic alternative rock band with metal and prog influences based in Alberton, Johannesburg, South Africa. They have played near enough every South African rock music festival and are over on a short trek around the UK. They hit Brum tonight to enthral us with a short but entertaining and thought-provoking set. They kick off with the haunting `Both Sides` a song which I thought had some religious connotations and a great chorus line of “So let’s breathe, let’s just breathe, The clean air will help us to see…” This opener comes from their 2016 album ‘Convergence’ as do the majority of tonight`s tracks.

The fellas have a new EP `Lungs Full`, which will be the first in an evolving concept, the band plan to release a series of digital EPs over the coming months. Once they are all out, they’ll compile them into a full album and release it on CD and vinyl. We get a taster with the cut `Still In Hiding` from the said EP and it`s quite an open and expansive offering with Sashan Pillay`s drumming, Alvin Boucher bass licks and Kyle Engelsman`s guitar riffs coming to the fore. It`s back to the `Convergence` release for the next three numbers and we get the most straight up rock outing with `Satellites`, before the musically intricate `Walls Down` which seems to me to be about reconciliation and `Ascendance` which was quite an intense brooding passage. The show ends with `Sleep / Escape` from the recent EP and highlights what the band are about. Atmospheric, elaborate music and musicianship, some thoughtful lyrics and Wayne Boucher`s dynamic vocals. There is so much to enjoy with Deity`s Muse, I get to see a lot of bands live but these guys really made an impression on me. I really hope I get chance to see them again real soon.