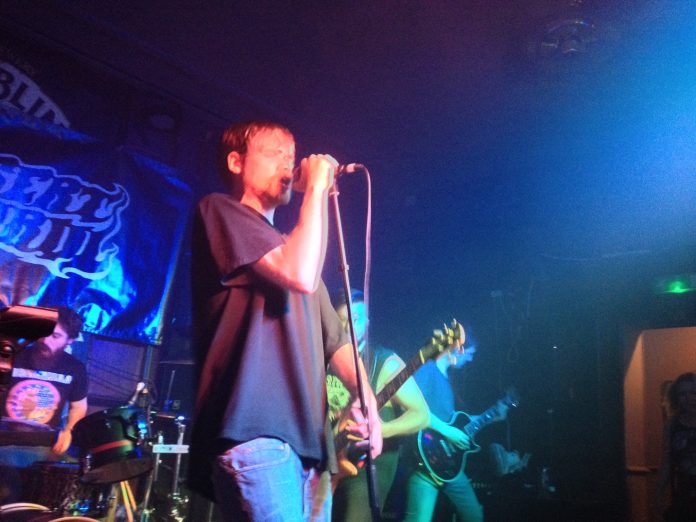 As good a stoner rock trio as you’ll find anywhere. Oh, and a man got naked.

If, like MVM, you have only listened to Oxfordshire’s Mother Corona online, you can basically forget the experience. Live is clearly where it’s at for the trio and the groovy rumble they make sets teeth rattling and glasses shaking from the off here. Tracks like “Sunseeker” add an extra dimension, while the stylings of a new song “My Diablo” – which sees the “you got nothing on me” refrain burrow its way home, are a real highlight. Evidently not a band who thinks life should be taken all that seriously, singer/drummer Dave forgets what day it is, while guitarist Lee merely brings the wrong plectrum. Nothing though, can stop stompers like “Back To Hell” doing the job rather well. Tonight Mother Corona are superb.

Then there’s this: “We are just gonna play some rock n roll up here if that’s ok” offers up Grifter singer/guitarist Ollie. Oh go on then, if you have to. What that rock n roll entails is an astonishingly good “She Mountain” from their most recent “Return Of The Bearded Brethren” record. It also means “Princess Leia” a song that begins with the line: “I’m a man of a certain age” and then proceeds to go about its business rather like Neil Fallon’s beardy gods, Clutch. Elsewhere “It’s Not Me, Its You” makes good on its claim to start like AC/DC and end like ZZ Top and a brand new tune, “Failing Asleep” swaggers around most pleasingly. There’s a place here for older material too and “Alabama Hotpockets” is still as good now as when it resonated around the Sophie Tent on a Bloodstock Sunday Morning two years back – and like then, hints at Groop Dogdrill. There’s even time for snotty run throughs of The Damned’s “Neat Neat Neat” and Dead Kennedy’s “Police Truck” in a set where anything can happen, but it’s always great. Grifter then, from the West Country and proving rather succinctly that Devon knows.

It probably should be said at the start of this that MVM rather likes Oxford’s Desert Storm. Their stone cold stormer of a new record “Omniscient” got a 10/10 review on our pages. It’s also true to say that this is our first look at them on this run. One chorus into “Outlander” and it’s abundantly clear that they are in something approaching top form. In contrast to the other bands tonight, DS are a five piece and, perhaps the most metal thing on view tonight, they have singer Matt not so much crooning as gargling gravel. Their twin guitar attack here adds real depth and there is a real slam about their work. It also helps that Desert Storm have in their arsenal, several songs from the very top draw, not least “House Of Salvation,” which verges on exceptional. That said, though, they appear to view reflection on their work as something for others, as a new one is unveiled – perhaps slightly heavier than usual and borrowing an intro from Therapy?s “Church Of Noise” on first listen, it bodes extremely well for what’s to come. The first single from “Omniscient,” “Queen Reefer” by contrast is almost an old favourite and could crush The Iron Road in its bare hands. There’s a bare something else before the end too as Mother Corona’s Lee joins for a duet and does so with absolutely no clothes on – and by crikey does he wave his appendage around with glee. Happily restored to a five piece and even better fully dressed, it’s left to Desert Storm to finish off with the dark and swirling brew of their older classic “Enslaved In The Icy Tundra.”

The final word goes, perhaps fittingly, to the headliners. “The great thing about tonight,” says Matt  “is that no one sounded the same. Everything complimented each other well and it just flowed.” This. Nail. On. Head. Quite the night. One way or another.