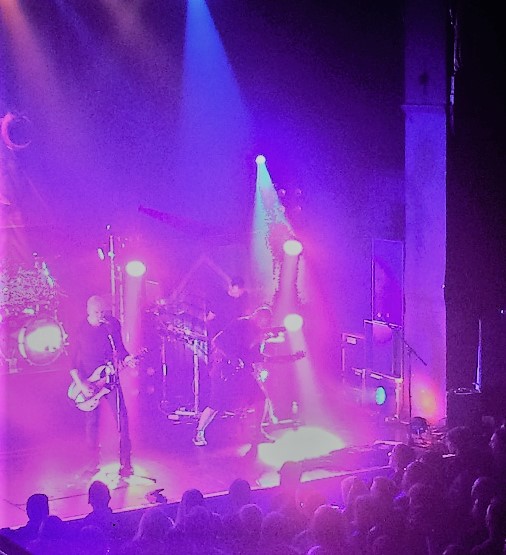 Devin – and his weiner of apathy – hit Brum

Norway’s Leprous are a band that deals in intensity. That much is evident in their half an hour of heavy, progressive metal. That said – as befits an outfit that was also Ishan’s backing band – they also deal in light and shade too and there are glorious changes of tone throughout. In Einar Solberg they have a singer of rare power and very clearly their natural habitat is the live arena because it’s here they truly come into their own.  A set that is largely culled from their most recent effort “The Congregation” has “The Flood”  as a real standout. “Slave” which ends things here, sees them take their performance to another level and really shows the skill Leprous have for work that is challenging and yet accessible.

The strength of this bill is perhaps best shown by the fact that Tesseract are capable of selling out the venue downstairs and are back in the ranks of supporting tonight. Now, thankfully with their singer hokey-cokey days behind them, with vocalist Daniel Tompkins back in the fold and the follow up to the brilliant “Polaris” in the works, Tesseract are a band right at the top of their games. Tracks from all their albums augment this spellbinding 45-minute set. “Of Matter: Retrospect” is particularly mighty in the middle, and the pair of “Polaris” tunes – “Hexes” is astonishing and “Survival” not far behind – give rise to the thought that this might be our best prog metal band. Such is the mastery of delivery (and Tesseract are a band who lets the music talk without need for much chatter elsewhere) that it feels like a recital rather than a viscerally exciting show on occasion, but there are few bands on these shores who can match these five for talent. “Of Mind: Nocturne” proves exactly that – and also that their time as headliners here will surely come.

There is a school of thought that says prog needs to be a little po-faced and there’s not ever a lot of laughs. No one told that to Devin Townsend. Arriving on stage with a cheery wave and the words: “let’s make things a whole lot weirder, shall we?” He punctuates the show here with musings on the fact he used to live just down the road in Wednesbury (presumably when he was in The Wildhearts), that he hates his band because they can grow beards, that stage banter gets too samey, and that rather than a “Love Gun” like Kiss he has a “wiener of apathy, suitable only for insemination and sadness…..”

In other words, welcome to the mad, crazy and also brilliant world of Devin Townsend.

He’s here because last year he released a new album called “Transcendence” and if Townsend, like his friend Ginger, occasionally suffers from patchy material, then that one was squarely in the draw marked “magnificent.”

There’s not too much of the new material, but “Stormbending” is incredible, and “Failure” is huge. Rather than focus on the new album, Townsend sets about cramming as much as he can into the time he has.

“Hyperdrive” is a real favourite, “Ziltoid Goes Home” slams like the heaviest of metal, while “Supercrush!” according to the man himself is “the happiest song in the world.”

After the enormous love song “Kingdom” he speaks again. This time to say that he was leaving the stage, but would be coming back, but still would Birmingham be kind enough to cheer. The very nearly sold out crowd obliges by going all kinds of crazy, and are rewarded by an acoustic “Ih-Ah” and a jaw-droppingly good “Higher” from the new album by way of an encore.

The word “unique” is bandied around to the point where it means nothing. Devin Townsend really is, though. There is no one like him, and to him it comes naturally. And tonight really was, just like his album nearly said, transcendent