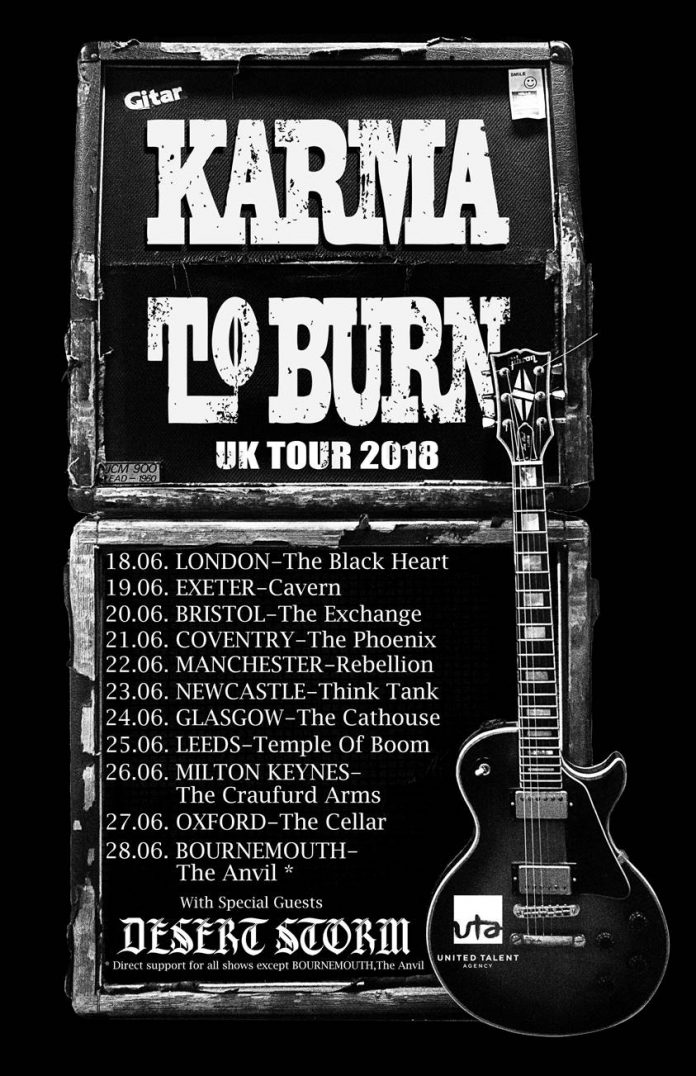 Hot on the heels of the release of their new album ‘Sentinels’, out now on APF Records, Oxford based heavy-weights Desert Storm are proud to announce their support to West Virginia stoner rock legends Karma To Burn on their UK tour in June.

“It’s been a few years since we last toured with our friends in Karma To Burn,” states guitarist Ryan Cole. “It’s great to have been asked to be a part of this by the band and to tour the UK in support of our new album Sentinels. We will be returning to some cities we’ve not been to in a long time as well which is cool!”

“Karma To Burn are just great to watch live and have been rocking stages all over the world for over 20 years,” continues Ryan. “They’ve shared the stages with bands such as Metallica, Clutch, Down and have a strong die hard fan base. If you like riffs, you should come along to a show on this run. It’s going to be a good one for sure!”

‘Sentinels’ follows the release of 2014’s critically-acclaimed ‘Omniscient’ album and has seen Desert Storm move in a harder, darker and much heavier direction. Recorded with engineer Jamie Dodd (Orange Goblin) at Flesh & Bone Studio’s, Hackney and tracked by Steve ‘Geezer’ Watkins at Woodworm studios (which has also been used by legendary Black Sabbath guitarist Tony Iommi), ‘Sentinels’ moulds together different aspects of sounds from the heavier end of the spectrum, taking in elements of doom, sludge, stoner, grind and all out metal to create a colossal sound.

This week Desert Storm have also released a new lyric video for the track ‘Capsized’, a gloriously riff-heavy pounder that tells the story of a hermit who does battle with his own reclusive nature.

“He’s gentle soul who busies himself with thoughts and writing, at odds with his demons and depression,” details frontman Matt Ryan. “All the while, his time spent alone affording him the opportunity to look inwardly and discover who he really is. The self-realisation that his time spent in isolation is being squandered, and that years spent without real human experiences are wasted years, he finally learns to trust himself and builds the courage to leave the comfort of his home to be ravaged and killed by wolves.”