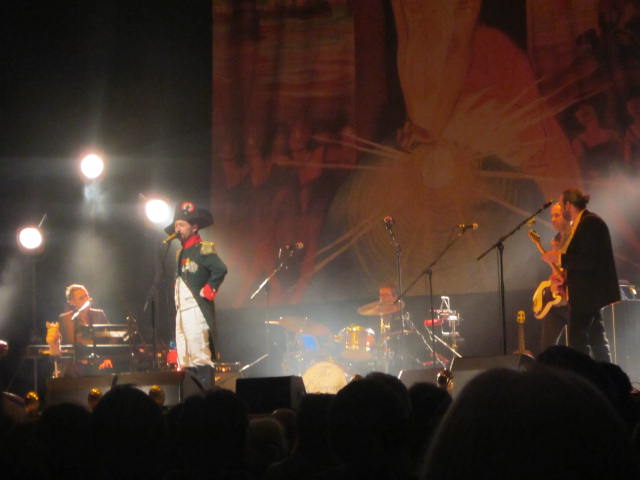 Of the thirty two counties in Ireland, there are about three I haven’t visited and Cavan is one. Nevertheless, tonight’s support, Lisa O’Neill hails from there and brings a little flavour of that county to us. I must admit it didn’t start well for me when she opened with a cover of “Old Man River” and I feared the worst, a half hour of covers. But no, second song in and it’s a story about dancing with a form thrown together to resemble Elvis Presley. I mean an Elvis record as the head, with a shirt on a hanger, a pair of trousers on a tripod and some blue shoes. Indeed this is the quirky humour of this lady and her stories. She has a unique voice somewhere between the colloquial feel of Mary Coughlan and huskiness of Marianne Faithful. We get songs about charity parachuting “Pothole in the Sky” and a red jumper/ cardigan with “Red Geansai.” This turned out to be an enjoyable and amusing half hour. The self effacing nature of this artist meant that when the audience applauded before a song, she warned them that they hadn’t heard it yet so might want to wait.

What is it about the Province of Ulster? It has produced a number of wonderful, what I’d call Old Time Music Hall, Orchestral or Vaudeville artists. The most prestigious being, in my opinion, Peter Wilson or Duke Special and Neil Hannon or The Divine Comedy. It must be over twenty years since I last saw The Divine Comedy. Indeed, I am led to believe that Hannon has not toured TDC for six years due to his unrelenting workload. So when a date was penned in, in my home town, I had to attend.

There is very little fanfare, just the lights dimming and the band walking on stage. Then it’s straight into “Down in The Street Below”, followed by “Assume The Perpendicular” and “Bad Ambassador” before they come up for air. A bowler hat is donned and an umbrella carried before we get a couple of numbers from the last release with the title track “Bang Goes the Knighthood” and “The Complete Banker.” A cheer goes up as we get a rocky version of the hit single “Generation Sex.”

“Our Mutual Friend” and the unassuming “Alfie” are shared before we hear an extended version of “The Certainty of Chance” which gives Hannon the time and opportunity to leave the stage and get a costume change. He returns kitted out as Napoleon and launches into a bombastic version of “Sweden” A new album Foreverland, the 11th studio album, was released last month and we get four tracks from this new release “How Can You Leave Me on My Own”, “I Joined The Foreign Legion (To Forget)”, “Catherine the Great” and “Funny Peculiar” where Neil is joined by support act Lisa O’Neill on this duet. In the midst of this new material “A Lady of a Certain Age” was sandwiched in-between.

We enjoy a break in proceedings, which is referred to as a cocktail break, where a trolley is cracked open and the band make or help themselves to drinks as ELO`s “Living Thing” is piped through as background music. It’s really just an excuse for Hannon to get rid of his uniform before reappearing for what is stated as the Indie Disco section. We are all encouraged to stand up and dance. This is the final part of the show and we revel in “At The Indie Disco”, the cracking “Something For The Weekend” my personal favourite “Become More Like Alfie”, “I Like” and to round the evening off the superb “National Express.”

This was an excellent reacquaintance with an artist that I’ve always enjoyed and with the new album, he certainly hasn’t lost any of his quirky wit and sense of humour. As usual, this evening was more of an event than a straight forward gig and I’m certainly glad that I made the effort to attend.