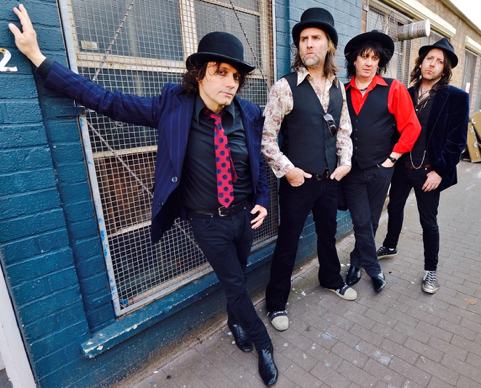 Last Great Dreamers release video
Last Great Dreamers unveil the brand new video for Oblivion Kids, three minutes of sonic power-pop mayhem. The anthemic Oblivion Kids opens their new album Transmissions From Oblivion released on September 30th through the bands independent label Ray Records.
Last Great Dreamers wrote Oblivion Kids from the “perspective of a loner, someone who wants to be part of something with the need to belong. Their imagination is free but they’re restricted by social or emotional boundaries. The desire for that buzz that is just out of reach.”
“For the video we came up with a rough storyboard & used some aspiring child actors & a wrestler, then taking inspiration from what was available to us & our own dark humour we just kind of let them loose with some guitars and various outfits & wigs and left the camera rolling. We think the end result captures the essence of youth & the general vibe of the song!”
Dive head first now into the fabulous Oblivion Kids video :
Transmissions From Oblivion is the Last Great Dreamers first brand new album since they reformed and they’ve turned up the dials to deliver an album chock-full of trademark hook-laden anthems. Spirited, diverse and occasionally dark, it promises to be one of the most talked about albums of the year.
To celebrate the release of Transmissions From Oblivion the Last Great Dreamers take their rocket fuelled power pop on the road for 12 headline dates, including London’s Nambucca on September 30th ,where they “will be playing quite a few tracks from the new album as well as old favourites & trying to pick a few songs from the last two albums that we haven’t played live that much over the last few tours”.
Transmissions From Oblivion is an energetic yet sensitive album that celebrates music and storytelling with14 finely crafted songs overflowing with rock’n’roll attitude, emotion and glamour. The recording of the album was an “incredibly organic and yet cathartic process”, working with producer Tony Harris the band have created an aural treat. With no calculated image or reliance on nostalgia Last Great Dreamers instead have honestly created an album that is full of romantic bravado and the perfect manifestation of their immutable wit, sadness, quiet anger and charm.
The opening power pop anthem and new single Oblivion Kids sets the tone as the flamboyant yet urgent album takes the listener through 14 heartfelt songs. Including the previous  singles Glitterball Apocalypse, which documents the tragedies of rock n roll and the raucous Dope School, plus the best 2 minute pop/punk song the Buzzcocks never wrote The Way We Collide, before this quintessentially English album concludes with the punktastic clarion call Turn It Up.
There’s something indefinable about Transmissions From Oblivion but very special that makes it irresistible & despite being under the radar, Last Great Dreamers are possibly one of the most essential British rock bands of recent times. This stunning new album has the potential to lift the band above cult status to a much wider audience!
Last Great Dreamers with their distinctly British take on power-pop are the antithesis of grunge and the best band you’ve probably never heard. They built a formidable live reputation in the mid 90’s with their shimmering glam style. Their debut album Retrosexual, a love letter to the early ’70s glam scene, caught the attention of Kerrang! magazine, resulting in an awards nomination for ‘best new band’ before tragedy and disillusionment forced the band to call it a day.
In 2014 they staged a fabulous comeback releasing an album of rarities, the critically acclaimed  ‘Crash Landing In Teenage Heaven’ and have since toured with Runaway’s singer Cherie Currie in 2015  &  this year opened for bands such as the Darkness, Terrorvision, Hey Hello & Tigertailz and released 2 brand new singles ‘Dope School’, & ‘Glitterball Apocalypse’ both achieving no.1 status on the TBFM radio network charts.
In Transmissions From Oblivion, Last Great Dreamers have created a truly honest & personal album: their first set of new songs since their resurrection is highly melodic & full of emotion; with power, sensitivity & poetry, its catchy hooks, light & shade & rock n roll attitude ‘kicks like a mule’ –  a rare commodity in today’s world.
To pre order Transmissions From Oblivion  on CD & Vinyl go to:- www.pledgemusic.com/lastgreatdreamers
Transmissions From Oblivion  track listing
1. Oblivion Kids
2.  Love To Hate Me
3. Glitterball Apocalypse
4.  The Way We Collide
5.  Elegy For Us
6.  Alone
7.  Dope School
8.  White Light (Black Heart)
9.  Tommy’s Tears
10. Werewolves
11 You Don’t Work
12 Chasing Heroes
13 Misunderstood
14 Turn It Up
Catch the Last Great Dreamers on tour as they guarantee Rock’n’Roll mayhem!
Last Great Dreamers UK Tour
September
29th Bolton Bar Metro
30th      London Nambucca (Some Weird Sin Club)
October
1st       Wolverhamton Slade Rooms (with StopStop )
2nd      Norwich B2
6th       Newcastle Trillions
7th       Edinburgh Bannermans
8th       Wakefield Snooty Fox
9th       Sutton In Ashfeld Diamond
12th     Oxford Wheatsheaf
13th     Nottingham Tap N Tumbler
14th     Abertillery Dolls House
15th     Wellington Beambridge
Last Great Dreamers is
Marc Valentine – Vocals, Guitar.
Slyder – Guitar, Vocals.
Steve Fielding – Bass.
Denley Slade – Drums.
https://www.facebook.com/lastgreatdreamers
http://www.lastgreatdreamers.com/