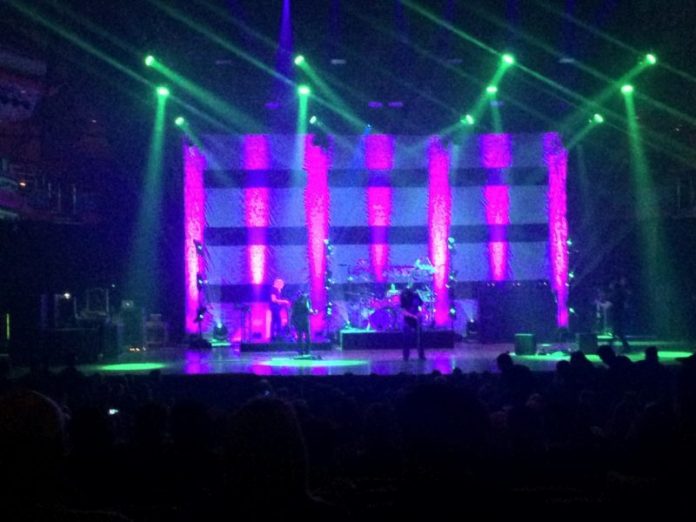 As singer James LaBrie notes during Act Two tonight, it wasn’t ever supposed to be like this.

Dream Theater were the band unlike any other. They were the band of technical geniuses from Berklee University that made music like no one else.

That second act – and that really is what it is, the evening clocks in at three hours give or take a short interval – sees the band play their breakthrough second record “Images And Words” in full.

Being 25 years old this year is all the excuse they need. They owe that collection a lot. It is, after all, the one that gave them the “hit single” – the wonderful “Pull Me Under” – and as LaBrie points out, it is that song that made the rest possible.

Acutely aware that they don’t fit in, DT send themselves up brilliantly. The Happy New Year 1992 intro tape plays snippets of a selection of songs from the era. Nirvana, Alice In Chains, Pearl Jam and the rest and it is worth remembering the context, because the reason that the beautiful surroundings of the Symphony Hall are full tonight is not because Dream Theater were “cool”, or hyped, or on the cover of magazines. It is because they made music that connected with millions of people.

Talent still shines through, and these boys – two of whom were not on the album back in the day – have got it. Loads of it. And where some bands of their ilk are cold and clinical, Dream Theater still look like they love doing this. They add a snippet of “Enter Sandman” just because, and celebrate drummer Mike Mangini’s birthday on stage too, as if to prove they are still having fun.

If the “Images And Words” album confounded expectations and ripped up the rule book, then the opening hour here does the same. Where most bands would do a Greatest Hits thing, the quintet are cut from a different cloth.

“The Dark Eternal Night” is an epic opener, “The Bigger Picture” is an intricate piece you might have overlooked, “Hell’s Kitchen” is one they don’t often play and alongside two from their most recent album, the sprawling “The Astonishing” is the highlight “As I Am”.

Which leads us to as they were, if you will, as the next 70 minutes is a celebration of “Images And Words” and it deserves the treatment. A stunning record when played as a whole. “Take The Time” and “The Miracle And The Sleeper” which doubles as Mangini’s drum solo (each member of the band gets their own little run here and there) are particularly thrilling, before the huge “Learning To Live” brings the record to a close.

But not the evening. Not even close, because Dream Theater finish with “Change Of Seasons” – all 25 minutes of it – and that stunning track is at its best here, with John Petrucci delivering his riffs as only he can, Jordan Rudess on keyboards giving his flourishes and John Myung, the quiet man of the band anchoring it with his supreme bass skills. Seeing it played like this is a real and rare treat.

At a time when we are told bands need hooks, choruses, an image, stylists and a million and one other things to “make it”, Dream Theater are the opposite. They are just incredible at what they do.  And for well over 25 years that’s been all they’ve ever needed to be.