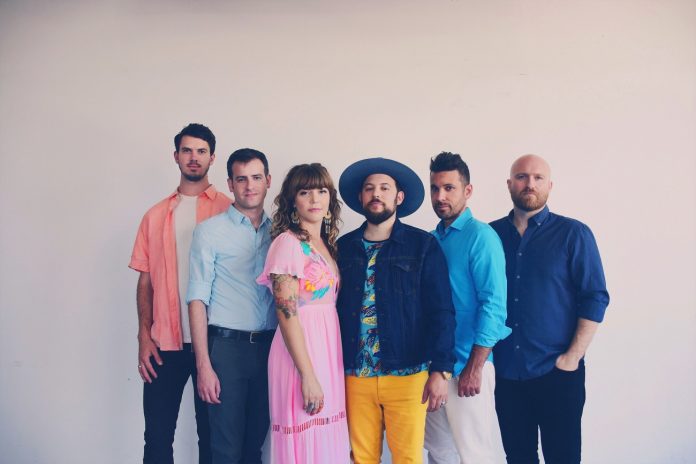 “‘Dreaming’ is a song about something I rarely talk about – the deep doubt and fear I and many other performers have right before we hit the stage – will we blow it? Will we forget everything and will people laugh at us? Is making music worth it? Maybe it’s stage fright or imposter syndrome but I wanted to create a song that shows the panic happening in real time – and that maybe we have to, accept that panic – you have to push through the fear and doubt to really live your dream in real life.
There is nothing l love more than playing music under the bright lights – but it’s not easy for me and sometimes it does feel like you have to kick through a wall of demons to get up on that stage at all.”
Z. Lupetin (DUSTBOWL REVIVAL)
The eclectic Los Angeles based Dustbowl Revival have spent a decade pushing the boundaries of American roots music, creating songs that fuse folk, funk and soul and performing transcendent live shows that saw the L.A. Weekly newspaper crown them the city’s ‘Best Live Band’.
Their latest single, ‘Dreaming’, is reflective of not only an ever-evolving approach to their music but also the ongoing question of what it means to achieve one’s dreams. The song’s poignant lyric mingles with the melancholic strumming of an acoustic guitar and downbeat horn section to create a kind of joyful sadness. As the first line of “what if you got everything you wanted” resounds, it is difficult not to mull over the trajectory of one’s own life and how getting what you want might actually be the last thing you would want. The chorus then raises the overarching question of consciousness with the refrain “somebody tell me that I’m dreaming, and this feeling ain’t gonna last.”
The band’s brand new album, ‘Is It You, Is It Me’, is infused with subtle pop sensibilities that enhance their already infectious sound, which is a slight departure for the group but also marks a milestone in their continued progression. Produced by Sam Kassirer (Lake Street Dive, Josh Ritter) and engineered by Brian Joseph (Bon Iver, Sufjan Stevens), the record represents the first time they have not entered the studio with road tested material. Instead, they spent an intense two-week flash creating and developing its songs, with each member playing multiple instruments and allowing ample space for spontaneity, even making a spur-of-the-moment choir and forming a nimble rock orchestra with friends. The result is an album that melds a plethora of styles, showcases superb musicianship and, most of all, offers excellent songs.
“I feel like we grew up for real on this record,” states band founder and co-lead vocalist Z. Lupetin, “both as musicians who have come of age on the road together as a kind of accidental family, and as collaborators making music even we don’t know how to describe. It’s exciting and a bit terrifying.”
Dustbowl Revival has taken the past and present and made it their own by turning it into something totally new. ‘Is It You, Is It Me’ represents another massive leap forward for the group and follows their acclaimed self-titled 2017 album, which took them from a “roots dance party band” that thrived on the festival circuit to a more nuanced group embracing darker, more soulful territory. It hit the top spot on Amazon’s Americana chart and contained the introspective folk number ‘Got Over’, which surprised the band by racking up almost 7 million Spotify spins. That album can now be seen as a direct bridge to their newest work.
DUSTBOWL REVIVAL
Z. Lupetin – lead vocals, acoustic guitar
Liz Beebe – lead vocals, ukelele
Connor Vance – fiddle
Josh Heffernan – drums, percussion
Matt Rubin – trumpet
Ulf Bjorlin – trombone
audio
Spotify spoti.fi/37Q7Fbu
Apple Music apple.co/2Fydz55
from the forthcoming album
IS IT YOU, IS IT ME
out 31.01.20
pre-order link
https://orcd.co/isityouisitme
dustbowlrevival.com