To this day, Premiata Forneria Marconi (aka PFM) is considered the most influential and respected Italian rock band and on October 27th, 2017 InsideOutMusic will release the band’s new studio album “Emotional Tattoos”. Now, the band reveals the album’s striking cover artwork created by Stefano Bonora / Artkademy.

The band comments: “On the cover you see a fantastic spaceship run by Franz and Patrick, bringing the band to places never explored before, introducing the audience into the new PFM world, where music has not only one identity but evolves and embraces many genres. PFM is famous for never repeating previous records and “Emotional Tattoos” is an album that will leave emotions on the skin, like when a spaceship lands in a fantastic world with vegetation and animals in harmony with each other.”

PFM began writing their new opus in 2016, started recording in early 2017 and finished both an English and Italian version of the over an hour long record in July at Metropolis Recording Studio with Alessandro Marcantoni. 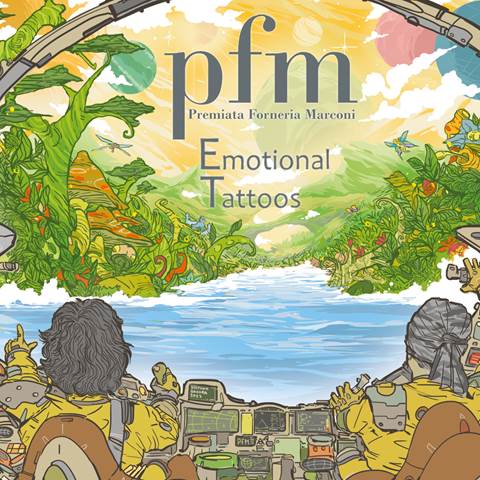 See below for the exact track-listing:

PFM is a very eclectic and exuberant musical group with a distinctive style that impressively combines rock, progressive, and classical music into one mesmerizing sonic entity. Formed in 1970, the band quickly gained a prominent place on the international scene by making it to the Billboard charts (for 1973’s “Photos Of Ghosts”), and winning a gold record in Japan while constantly ruling the charts in their home country until today. PFM were honored with position #50 in the “UK Classic Rock Hall of Fame” of the 100 most important artists in the world as well as being awarded two gold records in their home country in 1971 and 1997.

The album can already be pre-ordered in the following formats from the official InsideOutMusic online store:

Gatefold black 2LP+2CD – English vinyl with both versions on 2CD

12 May – Legnano (IT) Teatro Galleria

…more dates to be announced soon!