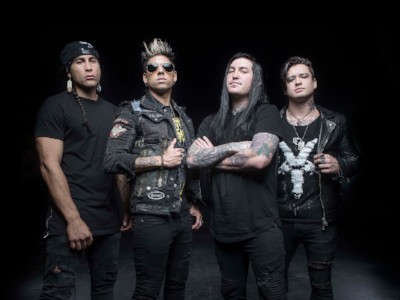 American rock band Escape the Fate are excited to share the music video for their latest single ‘Broken Heart‘, which features on the forthcoming studio album I Am Human, out March 30th via better Noise Record/Eleven Seven.

Directed by Frankie Nasso (Body Count, Steel Panther) and featuring an array of stunning camera work, the video for ‘Broken Heart’ pairs its slick production quality with the intense theme of the track which tackles the inner, emotional tug-of-war of a romantic breakup and the gratifying relief of finally moving on.

Having recently completed their UK/European headline tour, Escape The Fate are now set to return to Northern America for a number of headline appearances, dates supporting labelmates Papa Roach, as well as a run of shows in Australia and New Zealand celebrating the 10-year anniversary of their classic album, This War Is Ours. Tickets for all dates are on sale now with more info to be found on Escape the Fate’s official websiteHERE.The new album I Am Human was produced by GRAMMY® Award-nominated producerHoward Benson [My Chemical Romance, Adam Lambert], and sees an evolution of Escape the Fate’s sound that brings the band back to the excitement of their roots.

People will always undoubtedly bond over the experiences of love, loss, and life. On the new album, Escape The Fate transmit a raw, real, and relatable narrative through airtight songcraft, lyrical honesty, and stadium-worthy delivery indicative of a shared human experience. “I hope this album can be the soundtrack to good times and memories our fans create,” says lead vocalist Craig Mabbit. “I hope they get their own emotions out singing these songs with us at shows. I hope it’s part of the healing process. That’s what these stories do for us.”

I Am Human is available to pre-order now at http://smarturl.it/etfiamhuman and you can check out the lyric videos to the new tracks ‘Do You Love Me?’, ‘I Am Human’ and ‘Empire’ below.