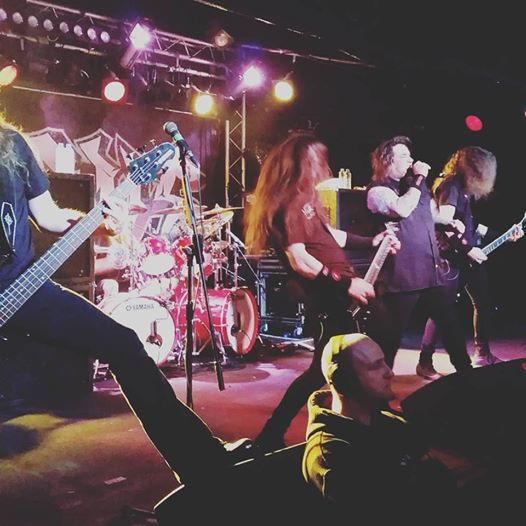 There’s a real glee in the voice of Lost Society frontman Samy Elbanna when he surveys the crowd and says: “This is our first time in Birmingham, let’s have fun shall we?!” And if that sounds simple it’s because everything about Lost Society is gloriously free of frills. Just a matter of weeks ago the Finnish four piece released an album called “Braindead” which is choc full of straight ahead thrash. It understood that there’s no “core” or made up sub genre needed and thrash should be primal, violent and exciting. Happily their 45 here minutes follows exactly this pattern. Heavy on new material – and just heavy in general – songs such as “I Am The Antidote” are given an added air of chaos on stage, and “Hollow Eyes” has a massive fists-in-the-air type groove. Older cuts like “Terror Hungry” is delivered with a knuckle duster chaser, but it’s the new stuff that’s really going to take Lost Society up a level. “Riot” is nothing short of an anthem and the closing “Only (My) Death Is Certain” simmers and broods as well as hinting at a kind of darker future. Are Lost Society the future of thrash too? Don’t bet against it.
It’s a case of in with the old and out with the old for Exodus. One of their old singers Steve “Zetro” Souza is back (which means the night is mercifully free of the type of…let’s call it “controversial”…. stage chat that so marred their last jaunt when previous mic man Rob Dukes was in the band) but founder Gary Holt is missing. His absence is because his “other” job Slayer are currently touring the US and with an air of good humour it’s marked with an blast of “Angel Of Death”. In his place is Heathen guitarist Kragen Lum, but close your eyes and you wouldn’t know the difference. It’s still an old skool thrash masterclass that Exodus deliver.
For 95 wonderful minutes there’s pits breaking out, there’s riffs being tossed out with something approaching malevolence and a general feeling that if something – anything – gets in the then it’s being crushed.
The set contains plenty from the most recent “Blood In, Blood Out” record and these come alive in this setting, the title track is a mighty beast, “Salt In The Wound” (which features Kirk Hammett on record) hurtles by and “Body Harvest” does everything you’d want a thrash metal song called Body Harvest to do.
There’s plenty of old stuff too and with Souza at the helm it sounds just right. Certainly “War Is My Shepherd” and the even better “Lesson In Violence” are classic in every sense and whilst “Zetro” is the convivial, smiling Ringmaster of this chaos, he’s more than capable of righteous indignation too as his take on the rabble rousing “Children Of A Worthless God” proves.
The last four songs are as good as it gets. “Impaler” is a whirlwind mixed with a hurricane and flick knife, and the encore that follows includes “Bonded By Blood” and “Toxic Waltz” which sound as fresh as daisies but way more deadly – plus the beauty of watching a new generation, one that wasn’t even born when it was released, in the pit is lost on no one.
And if “Strike Of The Beast” doesn’t sum up the night it concludes then this might: “we don’t care what people think about our heavy, fast, loud, abrasive heavy music,” says Souza at one point. “If they don’t like it they can shove it up their ass!” Or to put it another way. If thrash’s Big 4 was a Big 5, the fifth would be Exodus.
Photo courtesy of Tony Gaskin, Stage Dive Photography