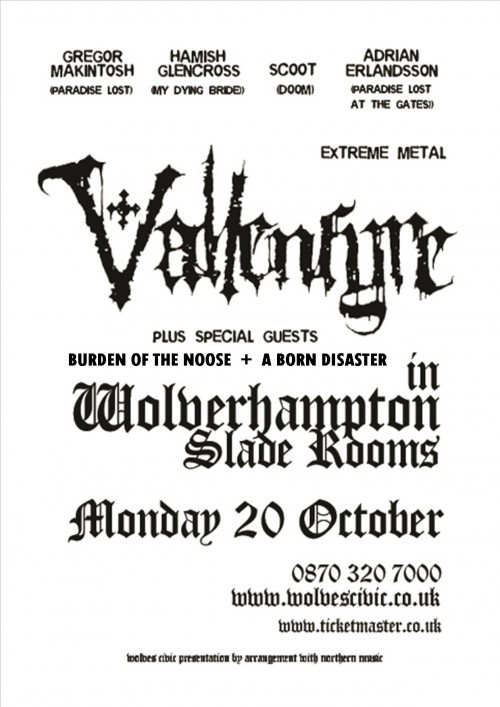 Vallenfyre, who feature Paradise Lost lead guitarist Gregor Mackintosh, as well as PL (and At The Gates( drummer Adrian Erlandsson, together with Hamish Glencross from My Dying Bride and Scoot from Doom, will embark on a European tour next month which includes a stop off in Wolverhampton.

The band, who released the album “Splinters” earlier this year to great acclaim, will play The Slade Rooms in 20th Ocotber.

Joining them will be brilliant Midlanders Burden Of The Noose, who impressed everyone (including us in the Metal To The Masses final) and A Born Disaster.

The band came into being when Gregor lost his father in 2009, as he explains: “Vallenfyre was something I felt utterly compelled to do. It was almost like I didn’t have a choice. I was told by a bereavement counselor that I should write down and vocalise my feelings. I did just that and then everything just seemed to take a natural course, he said.

That natural course was two brutal and brilliant albums, 2011’s The Fragile King and the aforementioned “Splinters”. No doubt the live show will be equally spectacular.