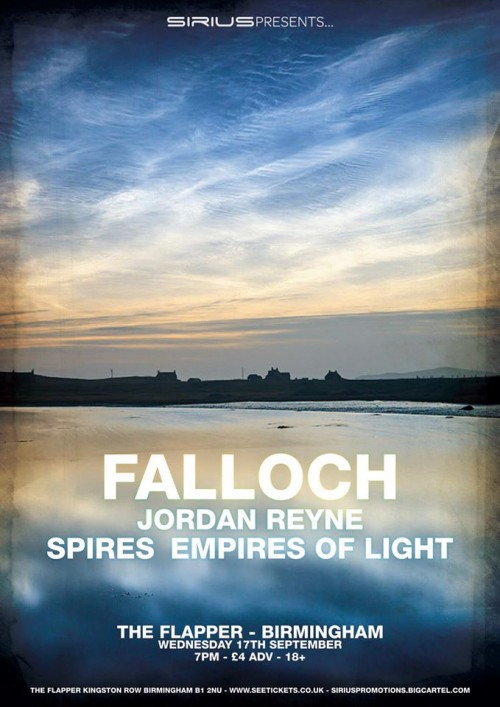 Falloch, the Scottish post metal band that we love around here, are to headline a superb looking show at the Flapper in Birmingham tomorrow. Falloch’s new album ‘This Island, Our Funeral’ is due for release through Candlelight Records on 22nd September and is already attracting wide ranging praise across the globe.

This is one of only two UK shows before they head across Europe touring with German post/ambient band Lantlôs.

Providing support is industrial folk artist Jordan Reyne, Those who were lucky enough to see Jo Quail at last years Jarboe show can expect similar jaw dropping artistry from Jordan, using just her voice, guitar and a couple of loop stations she layers complex arrangements of folk inspired tales with and industrial and gothic twist. Originally from New Zealand, Jordan is currently based in the UK but frequently performs at shows and festivals in the UK and across Europe.

Manchester based Progressive metal band Spires, comparisons are often made to Opeth, Emperor, Mastodon and Cynic; however this barely touches on the kaleidoscope of influences, both metal and otherwise, that combine to deliver a truly original, mesmerising and often transcendental sound. Spires combine technicality and intricate musicianship with a flare for song-writing that never loses touch of what music should be about, and helps the songs flow seamlessly as they progress.

Opening the show is dark drone post metal from relative newbies Empires of Light, formed at the beginning of 2014 their debut release ‘Apricity’ on Thirty Days of Night Records has garnered awesome reviews and is some of the darkest post metal you’ll hear for a while!

Finally to finish, here’s what we thought of Falloch last year