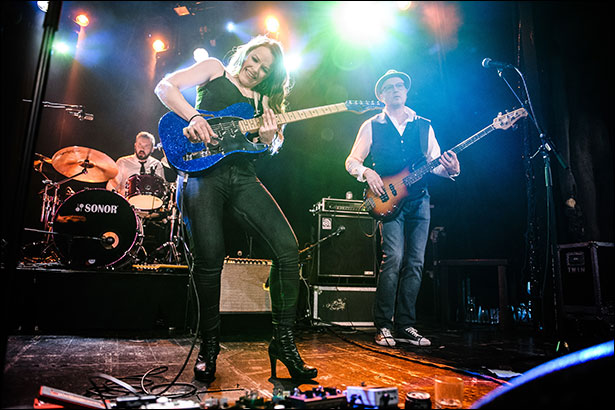 Finnish slide goddess under the spotlight

Take one part blues traditionalist, blend it with a forward-thinking music academy graduate, serve with a side order of skill and a garnish of Nordic beauty. What have you got? Singer/guitarist Erja Lyytinen, a.k.a. “the Finnish slide goddess” (The Blues Magazine).

Since first stepping foot in a recording studio nearly 15 years ago, Erja Lyytinen has become a bona fide star in her homeland and a celebrated fixture on the international music scene.

She’s recorded a grand total of nine studio albums in places as diverse as Helsinki, Memphis and Clarksdale, Mississippi, earning numerous awards and honours along the way. She feels equally at home playing tradit ional and modern blues, but has never been afraid to incorporate different styles, including  jazz, pop and soul, into her song writing.

Even motherhood hasn’t slowed her down. Her most recent album, the Elmore James tribute The Sky Is Crying – recorded a few months before she gave birth to twins – has been universally hailed as her best and bluesiest to date. “Erja has seemingly achieved the impossible by both sounding like Elmore as he played in the 1950’s whilst adding her unique flair and 21st century vista,” said Blues Matters magazine.

Born into a musical family in the town of Kuopio in Finland, Lyytinen quickly emerged as an artist to watch in her native country. She signed with Germany’s Ruf Records in 2005 and recorded her international debut Pilgrimage later that year. Her participation in the 2006 Blues Caravan tour gave audiences outside of Finland a first taste of her spirited live performances and led to a string of successful appearances in America.

The follow-up album Dreamland Blues took her back to the USA to record with David and Kinney Kimbrough (sons of Mississippi blues legend Junior Kimbrough). That album was voted Best Album of 2006 by Finland’s YLE Radio Suomi Bluesministeri. After two years on the road, she returned with her third album, Grip of the Blues in 2008, mixing hard-edged blues wit h modern R&B.

Her 2010 release Voracious Love was even more adventurous: The lavishly orchestrated Bed of Roses – featuring contributions from Marco Hietala (Nightwish) on vocals and Apocalyptica cellist Paavo Lötjönen – showed once and for all that Lyytinen was unafraid to push the envelope. With 2013’s Forbidden Fruit, she returned to somewhat more familiar territory.

Her 2014 album, The Sky Is Crying, is a dazzling collection of stripped-down, old-school blues recorded live in the studio, then brought her full circle. “I wanted to do a raw, down-to-earth slide guitar blues album ever since I visited Mississippi back in 2005,” says Lyytinen. Her tribute to music legend Elmore James convinced even the most discerning listeners that her feel for the blues runs deep and that as a slide player, she has few peers.

Canada’s Blues Underground Network chose The Sky Is Crying as Best European Blues Album and Best Tribute Album of 2014. It also placed in the top three international albums of 2014 as chosen by writers at Britain’s Blues Matters magazine, who also honoured Erja as the #2 international solo artist.

In 2015, boosted by the overwhelmingly positive response to her latest record, Lyytinen and her band will be touring extensively, starting with a 24-show wintertime run through Finland. The tour will coincide with the release of a brand new live album,Live in London, recorded at that city’s renowned 100 Club in October 2014.

Erja wouldn’t be Erja if she wasn’t thinking ahead to what’s next. “I’m already writing songs. In fact, I’ve got 20 songs waiting for the next album.”  In other words: The saga continues…