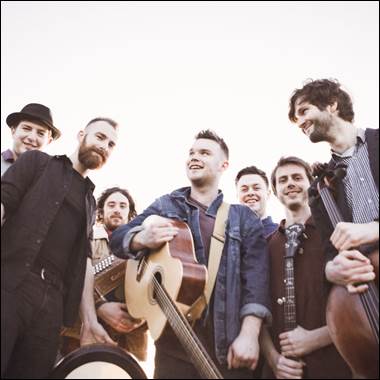 If you like your ‘folk’ edgy, turning traditional songs on their head, swerving into rock territory or nudging the mainstream, Sam Kelly’s your man.

Kelly, who says he owes much of his musical inspiration to his late Irish grandfather, is known as a former Britain’s Got Talent finalist (“a massive whirlwind experience”) when he was just 19. It’s part of his colourful story but that story has moved on in leaps and bounds, making him one of the most exciting young performers on the circuit.

Playing guitars, bouzouki and mandolin he undoubtedly has instrumental prowess but it’s the effortless soft-edged, stand-out voice that has fast tracked him to the top tier of the scene whether in his trio with Francis and Carson, in Cornish band The Changing Roomband or spearheading his own Lost Boys.

Trawling old songs and tunes for this innovative melting pot album, Kelly has found some gems to refashion kicking off with the rousing whaling shanty Greenland Whale which is matched at the other end of the 12-track album by a driving, full-blooded take on the trad English song The Keeper. It’s not hard to pick Kelly’s own Chasing Shadows (a message to anyone going through tough times) as a stand-out song on the album with its beautifully soaring instrumentation and a definite nod to mainstream. See

Pretty Peggy is released on the Navigator label and distributed by Proper Music. (Pre-order from Amazon, iTunes & Proper Music http://smarturl.it/8j4qah).  It will be showcased on a UK tour in November/December 2017.