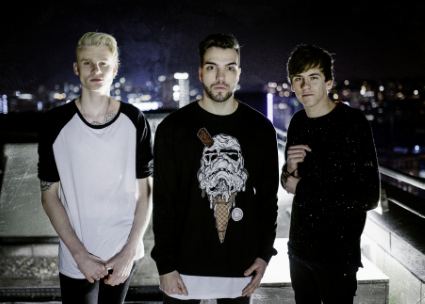 Striking you with a groove akin to Don Broco and Panic! At The Disco merged with the captivating All Time Low and Bring Me The Horizon,Beyond Recall are geared to deliver their hugely compelling sophomore EP Selfish Scars on Friday 13th January 2017.

With a growing reputation and legion of fans, Beyond Recall have been making waves and turning heads throughout the UK and beyond for the past two years. Formed in Bristol, the Alternative British rock unit take emotion, honest lyrics and heavy vibes to a whole new level.

After releasing their single Up Up!, which reached No. 1 on Scuzz TV’sMost Wanted Rock Chart,and their cover of Flo Rida’s hit single Low, both videos premiered on the BryanStars Youtube channel and the aforementioned tracks have already clocked in a combined 93,000+ views online. The band have relentlessly toured all over the UK, with three successful headlining jaunts across 2015/16, and support shows with the likes of Young Guns, A Skylit Drive and Our Last Night. Beyond Recall are no strangers to playing packed bars around the UK and their stock is only increasing.

Following from the glowing success of their 2015’s debut EP The Mixed Tape, the trio are now poised to break out with their alluring sophomore EP Selfish Scars. The record is a culmination of a year’s worth of endeavours, which has seen the alternative crew greatly hone their already formidable song-writing craft. 140 Characters ideally charts the band’s growth and hits home right from the off, with its hard-hitting riffs and stomping refrains. The track is an astute post-hardcore piece that resonates and underlines Beyond Recall’s abundant class and individuality. The EP’s namesake Selfish Scars pulls you close with its insanely infectious bouncy vigour and soaring refrain, while the threesome’s new single Get It Right flaunts the band’s undeniable supreme ability to set loose a gargantuan hook. As the record moves on, the captivatingOnlies andalluringAlmost continue to both demonstrate Beyond Recall’s highly impressive diversity and thoughtful layering. The EP finishes with the towering Tomorrow which explodes with rampant melodies, textured guitar work and earnest emotion, rounding off a record that should not only be heard but devoured whole.