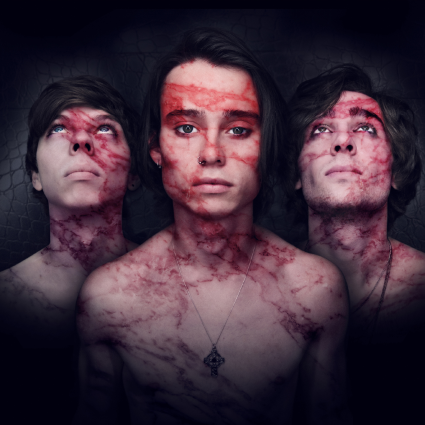 For any rock music fan it’s a source of total pleasure to come across a great young band that not only can rock out and play some great songs, but look the part and are pretty good into the bargain! Carnival Club are a quartet of late teenage, early twenty-something’s brimming with excitement, energy and kick out the jams, no holds barred vision. These Manchester based lads – Kai, George, Eddie and Joe – have absorbed their musical learning showing maturity way beyond their youthful years. Their songs are made in the north, will hit you from the north, south, east and west. They will astound the ears and bless the heart.

Maybe you’d like a Jimi Hendrix ‘Voodoo Chile’ drenched guitar lines and Sabbath sound wars topped off with a supersonic, cigarettes and whisky blues howl; a huge stadium blasting riff with an earworm of a chorus straight out of Valhalla, or a heady LA powertrippin’, staggeringly streetwise smack ‘em down head-rush and head-mash.

Then there’s more. Yes, those troubles, headaches and issues are there for all to hear – full-on, sonic boom boys boxing snappy, rappy, bratty, spooky and snarly male angst tinged with a touch of sweetness. The trials of youth are being presented in a thrillingly stand up and be counted way.
Alternatively – and this is pretty damn alternative in today’s manufactured, algorithm dominated, processed to an inch of its life offerings that we’re getting in excess – you get this. It’s a tasting of ‘Prog Rock’ grandeur, quicksilver American west coast psychedelia 50 years on from ‘The Summer of Love’, a hint of machine groove Euro techno, stirrings of Goth with plenty of eye-liner, a Daltrey-esque stutter, bunny rabbits and echo men in long black coats, the resurrection that wants to be adored, thundering herds of buffalo and wildebeest coming over the horizon, right through to the last fading resonance of the drummer’s flailed cymbals and hi-hats ending ‘Headaches’.

Welcome to the Carnival Club world. It’s early days in the entering of the zone pointing towards potential rock and roll greatness with lashings of style thrown in. The 5 songs on their debut ‘Magdalena’s Cape’ EP is a ‘My Generation’ statement for rock fans young, and not so young, recorded loud and clear. Dive in with no fears as, make no mistake, this band and its music takes no prisoners.
Emerging during and after all the rock and roll death of 2016, here’s Carnival Club getting set to bring 2017 alive.