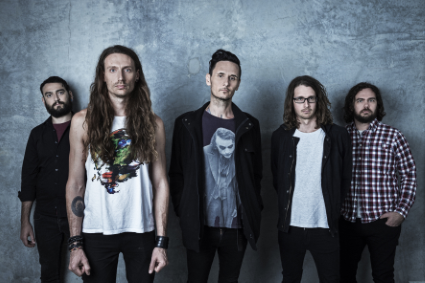 Dead Letter Circus already enjoy superstar status in their native Australia. With two breathtaking albums, which both garnered high chart positions, and frenetically celebrated concerts all over the country, the five-piece from Brisbane have earned themselves a faithful and enthusiastic fan base. Their current third album, entitled Aesthesis, once more presents the band’s typical mix consisting of powerful rock songs and anthemnic vocals, with Kim Benzie at the epicentre of their awesome sound, surrounded by a tight web of spirited riffs courtesy of guitarists Clint Vincent and Luke Palmer, and drummer Luke Williams and bassist Stewart Hill’s danceable grooves. An album which not only sounds tailor-made for high-rotation radio airplay but which is also set to unfold its full splendour live on stage

The group’s success story began in 2005 with their first single which was promptly played by Australian radio stations, showing the musicians in no uncertain terms that they were on the right track. Following two EPs, Dead Letter Circus brought out their debut album This Is The Warning in 2010, making it to no. 2 of the Australian charts – as did their second offering The Catalyst Fire three years later. Since then, Dead Letter Circus have established themselves as one of Australia’s currently most popular bands but still take the risk to rethink their tried and tested recipe for success, looking for new compositional challenges as they have done on one of their current songs, ´Change The Concept`. “On our first two albums, we first wrote the music and then the lyrics. This time around, we did it vice versa,” Benzie explains. “We just met at the rehearsal room and jammed along to some vocal parts which I had already composed. What had initially been intended as an experiment worked really well from the start. Right from the beginning ´The Burning Number`, the first track we worked on, was like a breath of fresh air for the band.”

Not only the vocals but all instruments have benefitted from this new approach. Dead Letter Circus describe their modus operandi during the creation of Aesthesis as “freer and more focused, with more space for the vocals, but also with better and more interesting guitar work. Our sound has generally become more hymnic and more multi-layered.” The result proves him right: the opener ´In Plain Sight` and the subsequent track and first single release ´While You Wait`, which is supported by an amazing video, set the direction of the new album. Dead Letter Circus impress on Aesthesis with compositional maturity and their talent for anthems, their numbers containing elements from the independent genre as well as progressive and classic rock ingredients. Benzie: “Australia has a strong indie rock scene which proves that you don’t necessarily have to scream to sound heavy.” It would be difficult to come up with a better description of Aesthesis.

Just like it would be difficult to come up with a more accomplished production. This, along with the impressive musical performance of the five band members, is also due to the studio team surrounding Forrester Savell, Matt Bartlem and Chris Lord-Alge. Producer Savell has been involved in all the band’s albums to date and knows like no other the strengths and idiosyncrasies of this phenomenal act. Co-producer Matt Bartlem is famous for his work with Matt Corby und Jarryd James, among others, while Grammy winner Lord-Alge, responsible for the mix on Aesthesis, counts musical heavyweights such as U2, Muse and Green Day among his clientele. This doubtlessly favourable combination which Dead Letter Circus have chosen for their latest album release has ensured that after two successful albums, Dead Letter Circus have outdone themselves yet again.
DISCOGRAPHY
THIS IS THE WARNING (2010)