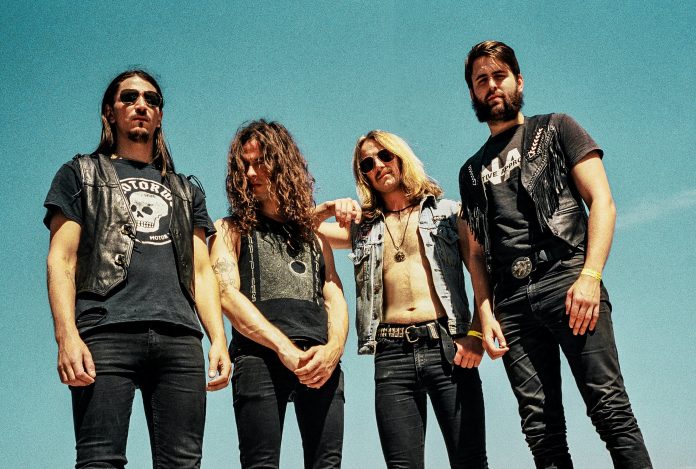 Since their debut release, DEATH ALLEY have relentlessly toured the world. From the smallest underground venues to the bigger stages at festivals like Psycho Las Vegas, Hellfest in France, and multiple Desertfests, the band has been leaving a lasting impact with their energetic performance. Their show at the prestigious Roadburn Festival resulted in a critically acclaimed live album, released earlier this year.

The ink on their new deal with Century Media Records isn’t dry yet and they’ve already left the Moon Studios where they recorded their sophomore album with producer Pieter Kloos (Motorpsycho, The Devil’s Blood, Dool). Right now, they’re hitting the road again with their friends Kadavar with whom they released a very special tour split 7”.

The band comments: “We’ve been sailing the sewage for quite a while now, and time has come to harvest the gold and offer it to you on a silver platter. We can spend much time and effort describing the feeling of the new music, the upcoming record, and the European tour with Kadavar, but that will always be just a faint shadow of showing it: so just come to the shows and blast the new song with volume at 11 – that’ll say more than the dozens of synonyms for ‘stoked’. Let us feast on it.”

“The Sewage” is also available as a digital single on all streaming and download platforms.

“The waves that these sweaty, soulful rock & roll veterans have been making are impossible to ignore.” – noisey.vice.com

“No doubt Black Magick Boogieland will stand as one of the best heavy rock debuts of 2015, and in keeping with that, it ignites the imagination as to whatDEATH ALLEY might go on to accomplish in its wake.” theobelisk.net