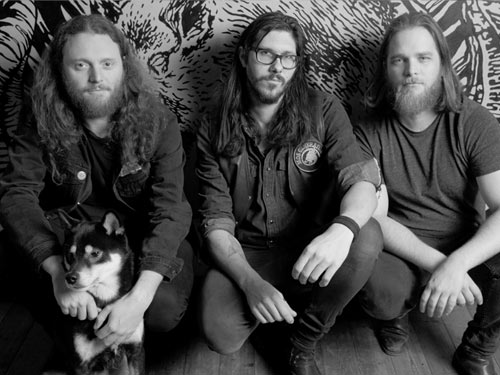 Ripple Music is thrilled to announce the signing of Danish retro rockers Doublestone and with it the release of their new brand new studio album, Devils Own/Djævlens Egn this May.

Originally formed as a duo in 2011 in Copenhagen by long time friends Michael James Bruun and Bo Blond Daugaard, Doublestone later became the power-trio they are today with the arrival of Bo’s bass playing cousin, Kristian Blond Møller.

Following a brace of impressive releases in 2013 – Set The World Ablaze EP and their self-titled Doublestone – the “cult-boogie” trio joined forces with Mos Generator’s Tony Reed to record their first full-length, Wingmakers, in the basement of an old cheese factory in the heart of Copenhagen. Catapulting themselves onto the international stoner-rock scene Doublestone made sure to leave no rock unturned making an imposing foray into the realms of 70s-influenced hard rock, bewitching psychedelia and southern metal. Now, in 2017 they are back and signed to one of the world’s leading specialists in Rock, Stoner, Doom and Heavy Psych; Ripple Music. Digging even deeper and going even further underground than ever before, their long awaited second album, Devils Own/Djævlens Egn, was produced and recorded by the band and Andreas Krohn at Wolf Ram Studios – a former World War II bunker – with Tony Reed on mastering duties.

Devil’s Own/Djævlens Egn is released worldwide on 5th May 2017 on vinyl, limited-edition/multi-colored vinyl, CD and digital via Ripple Music.