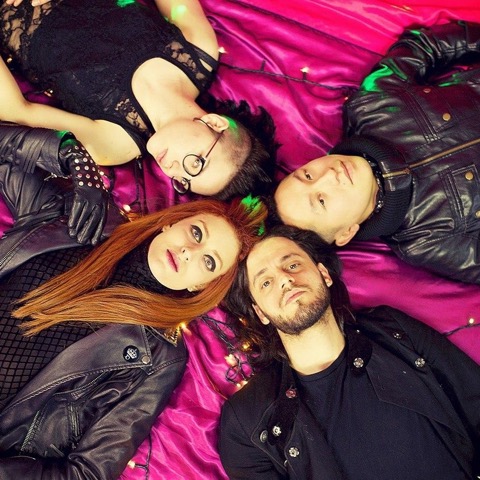 Regardless of their cultural differences, they all landed in the UK with a common goal: to make music for a living. Above all, they’re highly determined, impassioned and hungry for live shows!

Dronningen’s debut EP Royal Riot came out in 2016, comprised of 3 songs showcasing their early approach to electro-rock music. After extensive gigging in London, Derby, Leeds, Southampton, Basingstoke, Reading and beyond, the band is now prepared to release their brand new Sugarbox EP (June 2017).

Three new original songs (“Sugarbox,” “Taxi Driver,” “White Saliva”) and a bonus track (“She’s Gone Insane”) capture the raw energy of their live shows. Compared to their previous release, the band’s sound has changed noticeably, shifting from the digitally polished tunes of the past to a more primal, organic and wild sonic palette.

Their electronic components have not disappeared, but Dronningen’s human element grows stronger with their newest record.

Sugarbox represents a new balance between the vulnerable nature of mortals and the cold perfection of machines.