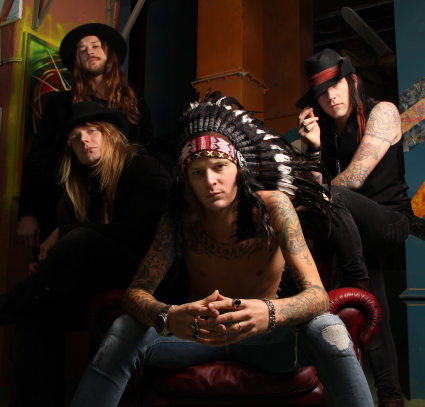 What could a young and extremely talented rock band do better after the release of their highly acclaimed debut album than immediately start focussing on their next step? Raising their standards even further instead of resting on their laurels, consciously honing their style without neglecting to listen to their own intuition. That’s precisely what the Dust Bowl Jokies from Sweden have done on their eponymously titled second album. Their new material is even more accomplished and diverse and has turned into a cutting-edge rock recording, including first-rate production, scheduled for release on Rodeostar on 22 April 2016. No doubt about it: the Dust Bowl Jokies sound just as haunting on their latest album as they do live on stage.

The band first drew attention to themselves in spring 2012 with Cockaigne Vaudeville. ´Boots On Rocks Off`, the most important single from the CD, embarked on a triumphal procession through radio stations in the US, the UK, France, Italy and Scandinavia. Taking that positive experience to the next level, the five band members Alexx, Victor, Action, Freddan and Nicke continued to ambitiously and single-mindedly work on their strengths and underwent an impressive development. “Our aim was to integrate an even wider range of different influences into our songs,” frontman Alexx explains. “We wanted to incorporate stronger grooves and unusual arrangements plus influences not only from the sleaze and glam genres, but also from rock, jazz, blues and African music. Pretty much the way Aerosmith and the Rolling Stones have always done.”

With his almost physically tangible energy, frontman Alexx is the Dust Bowl Jokies’ figurehead. His expressive voice adds a distinctive edge to the songs, the lyrics testify to their author’s great power of observation and penchant for intelligent metaphors, such as: “I´m the focal spot of the Polar Star, I´m the meds you hide in the cookie jar, And I am always in my way” from the song ´Bad Juju`, which sees the Dust Bowl Jokies combine a gritty guitar riff with bouncing grooves and a strong hookline. The same goes for rock numbers like ´Borderland` and ´Rawbone` with their astute lyrics. “At the end of the day, Dust Bowl Jokies is about real-life stories,” Alexx explains, “but in my mind, they often take place in old cultures, at occult rituals and secret voodoo rites. Which I try to wrap as cleverly as possible into interesting stories.”

This group works so well mainly because, in addition to its vocalist’s charismatic presence, its members never lose sight of the basic requirement for sweeping success: supplying the optimum instrumentation to support those powerful songs. And that’s something every one of them contributes to: rhythm guitarist Nicke with his accentuated performance delivers the songs’ harmonious substructures while drummer Action and bassist Freddan keep the groove going. And last but not least lead guitarist Victor, responsible for the album’s inspired solos, who departed from the band following the recording of Dust Bowl Jokies. Alexx: “We put every new number through its paces at our rehearsal room before analysing them carefully with our producer Martin Ericsson and going back to work on them some more. So when we finally went to the studio, the whole material had been reviewed and approved by six very critical pairs of ears.”

Six pairs of ears who consciously allowed little surprises in the overall context: when the Dust Bowl Jokies pay homage to good old country rock on ´Old Fashioned Country Canvas`, presenting themselves a little more pop-oriented and happier for a few minutes, the effect fits in perfectly with a diverse album such as Dust Bowl Jokies. “´Old Fashioned Country Canvas` was written in a few minutes at home in my cellar,” Alexx remembers. “We plugged in our instruments, downed a few beers, and ready was the song.”

You’ve probably guessed it: despite their great ambition, spontaneity and fun are still the most important factors for the Dust Bowl Jokies, who got together in Sölvesborg, Sweden, in 2011. You can’t but predict for the band and their new album Dust Bowl Jokies a thoroughly positive future.