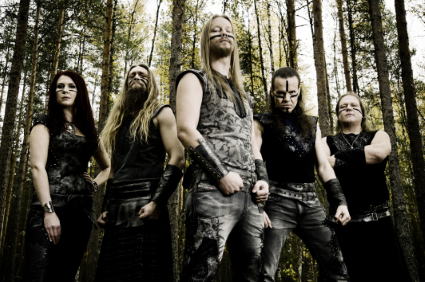 The sword bearers have just released a new record. Here’s the lowdown

Forged in 1995 as a trio by guitarist/vocalist Markus Toivonen, and presently featuring current and former members of October Falls, Rapture, Norther, Barathrum and Sinergy,ENSIFERUM has been flying the flag of epic, folk-infused death metal high and proud for two decades. A Latin word translating to “sword bearer,”ENSIFERUM‘s valiant tale begins humbly with three meticulously composed demos that raised the collective eyebrows of the extreme metal underground with their sharp and dexterous fusion of Bathory-ian darkness, Amorphis-styled melody and poignant accounts of ancient sagas and warrior quests. Released in 1999, it was third demo, Hero In A Dream, which included the band’s first-ever integration of female vocals, that reaped the praise and support of Finland’s Spinefarm Records, where the band would remain for five conquering studio offerings.

ENSIFERUMrecorded their self-titled debut in November of 2000 at Sundi-Coop Studios in Savonlinna with Tuomo Valtonen (Rapture, Nattvindens Gråt, Darkwoods My Brotherhood). Released during the new millennium’s emerging Viking metal movement, the album featured such guest musicians as Trollhorn (keyboards), Marita Toivonen (kantele) and Johanna Vakkuri (guest female vocals who first appeared on the Hero In A Dream demo). Christened, “an excellent platter of Viking metal,” by Sputnik Music, furthering that “The Finns put forth an excellent effort, one that combines heavy, yet melodic riffing, impressive, folky interludes, and fun sing/growl-along atmospheres,” the record’s methodic, yet organically-executed synthesis of Viking, folk and power metal adorned in fantastical themes of Scandanavian lore sans the more kitschy humppa trappings of many of their sword-wielding peers, earned ENSIFERUM the mass reverence of fans on European shores and beyond.

Second full-length, Iron, found ENSIFERUM holed upin Copenhagen’s Sweet Silence Studios. There in Denmark, during the Fall of 2003, the band’s second full-length was captured by the gifted hands of producer Flemming Rasmussen, notorious for his work on such groundbreaking recordings as Metallica’s Master Of Puppets andRide The Lightning. For the next decade, ENSIFERUM would gallop their way further into the hearts of metallers of all walks with their epic hymns and grandiose, cinematic live performances. Honing their creative skills both compositionally and thematically with each passing effort, the band’s unification of technically adept metallic guitar sweeps with the more traditional sounds of their homeland a la Finnish kantele, bagpipes, nyckelharpa and bodhrans, and the gentle balance of vocalist/guitarist Petri Lindroos warring growls with Toivonen’s and bassist/vocalist Sami Hinkka’s harmonized choruses, proved continually and deliberately infectious.

By 2013, ENSIFERUM — Toivonen, Hinkka and Lindroos alongside drummer Janne Parviainen and keyboardist/vocalist Emmi Silvennoinen – had become an international folk metal sensation having spread their valiant battle anthems to the stages of some of Europe’s most prestigious metal festivals as well as lengthy live pillagings through North America, Australia, South Africa, China, South- and Central America. That year, the collective joined the legendary ranks of heavy metal powerhouse, Metal Blade Records, for the release of their sixth studio album.

“The composing process was slow as always,” elaborates Hinkka of the One Man Army birthing process. “We twist and turn every note, chord and part upside down so that we can be sure that the result is the best possible. We cut down the actual amount of tracks on the record and really arranged the instruments more wisely. The recording process was equally long and hard,” he continues, “but rewarding and full of incredible moments. Instruments were actually played and left as they were instead of creating tracks from hundreds of different takes, moving them to the grid and modifying things. Of course computers were used but overall we made everything as analog as possible. Listeners can experience a better sound and natural groove, something that we think most metal albums lack these days. Overall, the album sounds much more like a band playing live rather than ‘midi-metal.’ I think we’ve learned from previous sessions what we like,” he continues, “and on this album I think we finally reached the level songwriting and sound wise that we have been reaching for on our previous albums. We are extremely proud of each second of this album.”

Commended by Outburn Magazine for songs that are consistently “epic” in scope with a “reliance on catchy melodies,” ENSIFERUM‘s crushing One Man Army serves as the follow-up to 2012’s critically-lauded Unsung Heroes full-length and comes shrouded in the stunningly detailed, mythological cover craftings of renowned illustrator Gyula Havancsák (Annihilator, Tyr, Elvenking, Stratovarius etc).

“On the new album, we took many things musically to the next level so we decided also to try something new graphics-wise,” relays Hinkka. “Gyula Havancsák did a phenomenal job! For the first time it was really nice to be more involved with designing the cover and all details. Our humble gratitude to Gyula for all the patience and really amazing results. We couldn’t be more satisfied!”

As a precursor to the release, ENSIFERUM unleashed the special Suomi Warmetal EP for public consumption in December 2014. A four-track platter of bonus cover tunes featuring the band’s rendition of Barathrum’s “Warmetal,” Iron Maiden’s “Wrathchild,” Uriah Heep’s “Lady In Black,” and Judas Priest’s “Breaking The Law,” the EP was unveiled as the covermount CD of issue #94 of Germany’s long-running Legacy Magazine. ENSIFERUM‘s One Man Army will be released via Metal Blade Records worldwide on February 24th, 2015 with widespread touring to be announced throughout the months to follow.