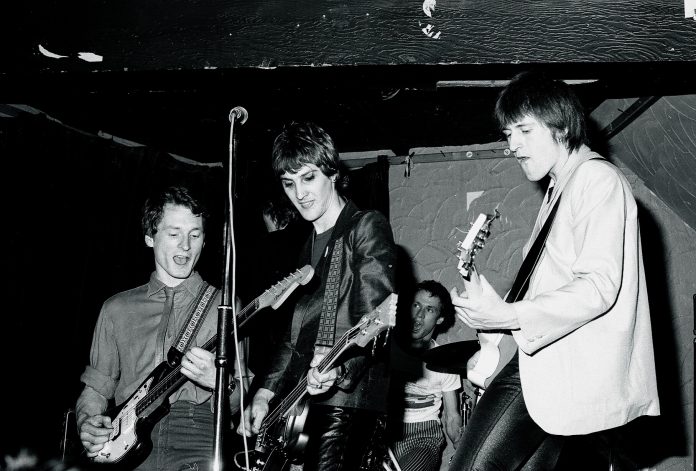 Forty years on from their inception, Nottingham new wavers The Favourites finally present their long lost debut album New Feeling.
Rising from the ashes of Stiff Records-signed pub rockers Plummet Airlines, The Favourites were founded in Nottingham by Duncan Kerr, Keith Gotheridge and future Pogue Darryl Hunt. They were joined by Tony Berrington and Kevin Green from local band The GTs whose drummer Paul Betts came on board later.
Over a two-year period, the band built an impressive following across the East Midlands and beyond, sharing bills with the likes of The Only Ones, The Vibrators, The Rich Kids and Squeeze. They released two singles – sprightly powerpop covers of Abba’s ‛SOS’ and The Wasps’ ‛Angelica’, now both highly sought-after – and recorded several more tracks toward an album, before, worn down with frustration and disagreement, the band disintegrated.
Hunt, of course, went on to replace Cait O’Riordan in the Pogues, while Berrington and Green formed New Rose-signed rockabillies The Deadbeats. Kerr joined Gotheridge in doo-wop hitmakers Darts, before joining rejuvenated 70s psych-punks The Brainiac 5 and Americana band Proudfoot.

Now, for the first time ever, both singles and their B-sides are collected alongside ten other never officially released songs on New Feeling, the first official vinyl album by The Favourites. Digitally remastered by Sean Read (Rockingbirds, Dexys) and mastered to vinyl by Noel Summerville, New Feeling comes with a free CD of the the album, with original pressings of the ‛Angelica’ single included in very limited copies.
The release will be accompanied by a new website, telling the full, unbelievable story of The Favourites, with new interviews, a family tree and never-before-seen photographs.
https://thefavourites.net/
https://www.facebook.com/FavouritesPowerpop/
https://thefavourites.bandcamp.com/album/new-feeling