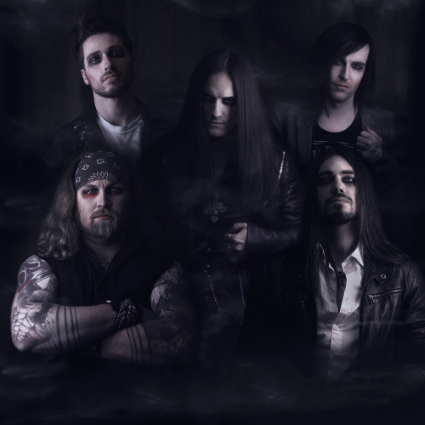 A video for ‘Bonfire Night’, a stalwart hard rock song with a gothic twist, the first single to be taken from the album, has already been released.

The Fright’s dark musical sound derives not only from goth rock legends such as Bauhaus, The Cult, Mission, Sisters Of Mercy and 69 Eyes (who they toured with in 2013), but also traditional hard rock and metal acts such as Whitesnake, Motley Crue, Guns ‘N Roses and Skid Row. Singer Lon Fright, who founded the band in 2002, confesses “I love Sebastian Bach!”.

‘Canto V’ was produced by Waldemar Sorychta at Dortmund’s Waldstreet & Denroad Studios. “Having produced legendary discs like ‘Wildhoney’ by Tiamat, Waldemar was my absolute first choice,” explains Lon, continuing; “He’s worked with bands like Moonspell, Lacuna Coil and Sentenced, and is a fan of Type O Negative, so he fitted perfectly into our perspective. It’s an honour for us to have him produce our album.”

The five-piece’s typical layered vocals trademark sound can be heard on every single note on ‘Canto V’. “In the new songs we’ve taken the vocal harmonies, which always defined the character of our music, to a new level” explains Lon Fright, continuing; “The goal is always to produce catchy songs with a refrain people can sing along to.”

The album’s lyrics, however, are anything but trivial singalongs, as they address general questions about the meaning of life. Referring to songs such as ‘No One’, ‘Leave’, or ‘Wonder Alone’, Lon states that “Following recent events like the refugee crisis, renewed nationalism, the closing of borders, or demands for increased surveillance and security, these new lyrics are the most socially and politically critical I’ve ever written. But I also see them as a countertrend to all the meaningless stuff around, and not just in the mainstream. ‘Canto V’ is famously known as the first real circle of hell. If we don’t open our eyes soon and shake off our fear of all things new, we’re in danger of sinking deeper and deeper into this maelstrom.”

The most unusual number for the Fright is album closer ‘In Sicherheit’, a cover of Stuttgart punk legend Fliehende Stürme. Lon Fright: “It’s the first cover of our career, and the first German-language piece on a Fright album, an homage to my punk childhood. We’re so happy to have been able to get Andreas Löhr, the singer and founder of Fliehende Stürme, as a guest musician.”