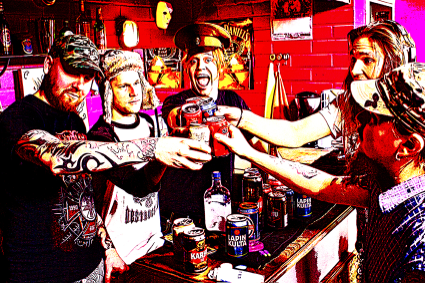 Their mission: to create new music to blow YOUR mind

The tale of Graveyard Shifters begins in Kerava, Finland – where the band party and destroy everything in their path using the savage sounds of punk, rock ‘n’ roll and metal.

The Graveyard Shifters started in the fall of 2013 with singer J. Matilainen and drummer A. Salmenoja being abducted by alien invaders from the sky. Our heroes we’re forced to return back to Earth and make a change to the nowadays ‘polished music’ that infects our planet from all corner of the globe.

Their mission: to create new music to blow YOUR mind. Soon Matilainen and Salmenoja had convinced the rest of the guys to join the Graveyard Shifters and, with a nasty touch, bring something real back your your sonic boosters whilst saving the greater good (they were also blackmailed with the threat of alien experimentation!) This is only to be the begining of the Graveyard Shifters tale and their relentless lust for music and partying.

Since their formation, within six months the band recorded their debut EP “Brainwashed by Moonshine” (2014) which self-financed by recycling the empty beer bottles from the rehearsal rooms floor… And now it’s time to release debut album “High Heels & Broken Bones” (2015). “Fucking nut cracking punk’n’roll from Finland.” –